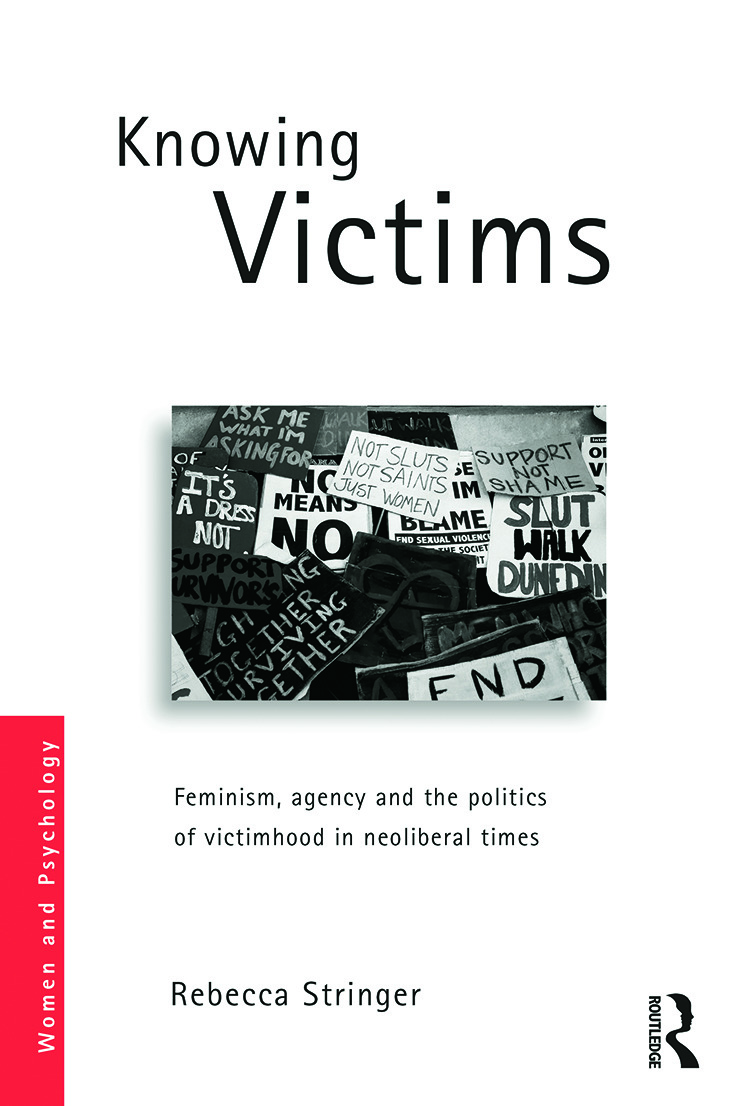 Knowing Victims explores the theme of victimhood in contemporary feminism and politics. It focuses on popular and scholarly constructions of feminism as ‘victim feminism’ – an ideology of passive victimhood that denies women’s agency – and provides the first comprehensive analysis of the debate about this ideology which has unfolded among feminists since the 1980s.

The book critically examines a movement away from the language of victimhood across a wide array of discourses, and the neoliberal replacement of the concept of structural oppression with the concept of personal responsibility. In derogating the notion of ‘victim,’ neoliberalism promotes a conception of victimization as subjective rather than social, a state of mind, rather than a worldly situation.

Drawing upon Nietzsche, Lyotard, rape crisis feminism and feminist philosophy, Stringer situates feminist politicizations of rape, interpersonal violence, economic inequality and welfare reform as key sites of resistance to the victim-blaming logic of neoliberalism. She suggests that although recent feminist critiques of ‘victim feminism’ have critically diagnosed the anti-victim movement, they have not positively defended victim politics. Stringer argues that a conception of the victim as an agentic bearer of knowledge, and an understanding of resentment as a generative force for social change, provides a potent counter to the negative construction of victimhood characteristic of the neoliberal era.

This accessible and insightful analysis of feminism, neoliberalism and the social construction of victimhood will be of great interest to researchers and students in the disciplines of gender and women’s studies, psychology, sociology, politics and philosophy.

‘Rebecca Stringer’s Knowing Victims masterfully untangles the complexities of victim talk, drawing from popular and scholarly feminist texts, Nietzsche and Lyotard, and examples of activism. (…) Knowing Victims offers a progressive’s guide – a road map, if you will – to contemporary discussions of the victim. Working through the contradictions is a complex job, and Stringer succeeds admirably.’ – Chris Brickell, Journal of the Sociological Association of Aotearoa/New Zealand, Volume 29, Issue 2, 2014

'This is a brilliant, startlingly original book. The author takes several threads of debate, each highly significant in its own right, and brings them together in a deft, decisive, and supremely cogent analysis. The inquiry addresses a number of urgent issues in the contemporary women’s movement and prises apart their connected meanings and effects. Knowing Victims presents insightful, compelling, and rigorous arguments for re-thinking what resentment, power, and justice for women might mean in neo-liberal times.' – Heather Brook, School of Social & Policy Studies, Flinders University, Australia

'Rebecca Stringer’s Knowing Victims offers a nuanced and spirited challenge to the prevailing discourses in which victimisation and victimhood are delegitimised. Most importantly, the roles of both neoliberals and the progressive left in promoting the victim-bad/agency-good construction are interrogated, as are the ways in which some strands of feminism are implicated in anti-victim talk.' – Joanne Baker, School of Arts and Social Sciences, James Cook University, Australia

'Social work professionals and scholars who appreciate a critical approach will find much to appreciate in this work. It offers a significant contribution to our scholarship, practice, and teaching. For my part, the book helped explain my vague discomfort with the popular term, ‘‘resilience.’’ Knowing Victims helped me see how this construct diverts attention from the social causes of suffering by offering the tantalizing suggestion that individuals might somehow be inoculated fromtheir ill effects.' – Amanda Barusch, University of Otago, Dunedin, New Zealand; University of Utah, Salt Lake City, USA for the Journal of Women and Social Work

Rebecca Stringer is Senior Lecturer in the Department of Sociology, Gender and Social Work at the University of Otago in Dunedin, New Zealand.

This series brings together current theory and research on women and psychology. Drawing on scholarship from a number of different areas of psychology, it bridges the gap between abstract research and the reality of women's lives by integrating theory and practice, research and policy.

Each book addresses a 'cutting edge' issue of research, covering topics such as postnatal depression and eating disorders, and addressing a wide range of theories and methodologies.

The series provides accessible and concise accounts of key issues in the study of women and psychology, and clearly demonstrates the centrality of psychology debates within women's studies or feminism.