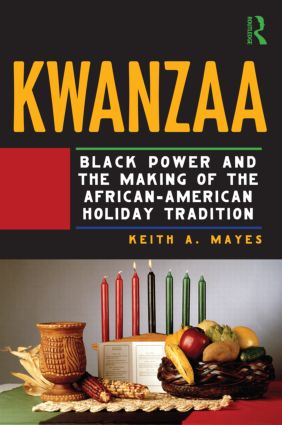 Black Power and the Making of the African-American Holiday Tradition, 1st Edition

By Keith A. Mayes

Since 1966, Kwanzaa has been celebrated as a black holiday tradition – an annual recognition of cultural pride in the African American community. But how did this holiday originate, and what is its broader cultural significance?

Kwanzaa: Black Power and the Making of the African-American Holiday Tradition explores the political beginning and later expansion of Kwanzaa, from its start as a Black Power holiday, to its current place as one of the most mainstream of the black holiday traditions. For those wanting to learn more about this alternative observance practiced by countless African Americans and how Kwanzaa fits into the larger black holiday tradition, Keith A. Mayes gives an accessible and definitive account of the movements and individuals that pushed to make this annual celebration a reality, and shows how African-Americans brought the black freedom struggle to the American calendar.

Clear and thoughtful, Kwanzaa is the perfect introduction to what is now the quintessential African American holiday.

"A groundbreaking, thorough, and illuminating discourse on Kwanzaa by one of the new leaders in the field. Kwanzaa: Black Power and the Making of the African-American Holiday Tradition is a vital resource that will enrich and enhance the discipline of African-American Studies. A pioneering work about a deeply important holiday."

"Keith Mayes situates Kwanzaa's invention within the black holiday tradition while demonstrating how embedded it was in the cultural nationalism of Black Power. Those wishing to further their understanding of African American holidays and their place in American culture would do well to read this book."

– Scot Brown, author of Fighting for US: Maulana Karenga, the US Organization, and Black Cultural Nationalism

"A thorough study, for advanced students and scholars. Recommended." – Choice

"Mayes deftly traces the journey from Kwanzaa’s Black Power roots to its evolution into a multicultural holiday embraced by multinational corporations and mainstream institutions including public schools, museums, and churches. … The book situates the history of Kwanzaa not only in the history of black protest holidays but also in the larger politics of the American calendar."

Keith Mayes is Assistant Professor of History and African American and African Studies at the University of Minnesota, Twin Cities.