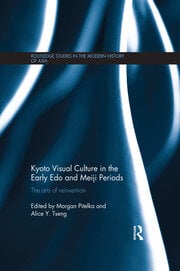 Kyoto Visual Culture in the Early Edo and Meiji Periods: The arts of reinvention

The city of Kyoto has undergone radical shifts in its significance as a political and cultural center, as a hub of the national bureaucracy, as a symbolic and religious center, and as a site for the production and display of art. However, the field of Japanese history and culture lacks a book that considers Kyoto on its own terms as a historic city with a changing identity.

Examining cultural production in the city of Kyoto in two periods of political transition, this book promises to be a major step forward in advancing our knowledge of Kyoto’s history and culture. Its chapters focus on two periods in Kyoto’s history in which the old capital was politically marginalized: the early Edo period, when the center of power shifted from the old imperial capital to the new warriors’ capital of Edo; and the Meiji period, when the imperial court itself was moved to the new modern center of Tokyo. The contributors argue that in both periods the response of Kyoto elites—emperors, courtiers, tea masters, municipal leaders, monks, and merchants—was artistic production and cultural revival.

As an artistic, cultural and historical study of Japan's most important historic city, this book will be invaluable to students and scholars of Japanese history, Asian history, the Edo and Meiji periods, art history, visual culture and cultural history.

Morgan Pitelka is a Professor of Asian Studies and Director of the Carolina Asia Center at the University of North Carolina at Chapel Hill, USA. His publications include Spectacular Accumulation: Material Culture, Tokugawa Ieyasu, and Samurai Sociability (2015).

is an Associate Professor of History of Art and Architecture at Boston University, USA. Her publications include The Imperial Museums of Meiji Japan: Architecture and the Art of the Nation (2008).

'...this volume is an informative and insightful investigation into the cultural history of Kyoto with an approach potentially applicable to the study of other cities and communities.'