Landscape and Religion from Van Eyck to Rembrandt 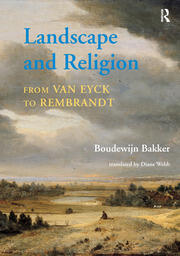 Landscape and Religion from Van Eyck to Rembrandt

Offering a corrective to the common scholarly characterization of seventeenth-century Dutch landscape painting as modern, realistic and secularized, Boudewijn Bakker here explores the long history and purpose of landscape in Netherlandish painting. In Bakker's view, early Netherlandish as well as seventeenth-century Dutch painting can be understood only in the context of the intellectual climate of the day. Concentrating on landscape painting as the careful depiction of the visible world, Bakker's analysis takes in the thought of figures seldom consulted by traditional art historians, such as the fifteenth-century philosopher Dionysius the Carthusian, the sixteenth-century religious reformer John Calvin, the geographer Abraham Ortelius and the seventeenth-century poet Constantijn Huygens. Probing their conception of nature as 'the first Book of God' and art as its representation, Bakker identifies a world view that has its roots in the traditional Christian perceptions of God and creation. Landscape and Religion from Van Eyck to Rembrandt imposes a new layer of interpretation on the richly varied landscapes of the great masters. In so doing it adds a new dimension to the insights offered by modern art-historical research. Further, Bakker's explorations of early modern art and literature provide essential background for any student of European intellectual history.

Contents: Preface; Introduction; The early landscape: background or subject?; The art of painting and the cosmos; The visible world: from semblance to reality; The beauty of the world as a path to God; The landscape of the mind: the world as allegory; Bosch, Patinir and Bles: worlds of allegory; The painter as geographer: cartographic and topographical landscapes; Meanings old and new: Bruegel, Ortelius and Calvin; A painter writing on landscape painting: Karel van Mander; The Dutch landscape as an art-historical problem; Didactic landscapes: Zacharias Heyns and Claes Jansz Visscher; Two poets and the theory of landscape painting: Huygens and Vondel; The painter and the landscape: Rembrandt van Rijn; Bibliography; Indexes.

Boudewijn Bakker is head curator at the Amsterdam City Archives and a senior researcher at the Centre for the Study of the Dutch Golden Age at the University of Amsterdam, The Netherlands.

'This important book is the product of a lifetime of scholarship, written with scholarly rigor and a native son's affection for the flat, watery terrain that gives the Netherlands its unique character. Bakker situates Dutch and Flemish landscape painting within the intellectual climate of its time, an era when the natural world was implicitly understood as a reflection of the divine. Exploring the work of talented artists from Bosch and Bruegel to Ruisdael and Rembrandt, this study elucidates the metaphorical, political, and religious connotations that early modern viewers found in landscape imagery. The new English edition, richly illustrated, brings Bakker's stimulating ideas to a wider audience.'

'... Bakker’s book is an extremely useful and engaging addition to the scholarship on Netherlandish and Dutch landscapes and to the early modern period more generally. He puts forth a powerful and comprehensive interpretation not just of landscape pictures, but perhaps even more compelling, of an enduring theological mentality operating throughout these centuries. He seeks to highlight the continuity and coherence of this period over time, a continuity that persisted in the face of dramatic economic, social, demographic, and political changes. This condensed English edition, beautifully illustrated and carefully translated, is especially welcome as it offers the rich results of Bakker’s combined theological and art historical research to a wider circle of scholars and will, as a result, continue to inspire further thinking in the broad field of Netherlandish studies.'

Journal of the Northern Renaissance

'... Bakker’s well-researched survey offers valuable insights into how creation and its relationship to its Maker were viewed by early modern theologians, philosophers and scientists and, not least, how viewers may have responded to images of this creation in landscape paintings and prints.'

'There are many laudable aspects to Bakker's book, including its lavish illustrations - twenty-eight color plates and seventy-five black-and-white illutrations - an enviable rarity nowadays. It is also well that Bakker makes explicit mention of period calls for religious harmony by Dutch rhetoricians: an important social current that has too often been downplayed in past scholarship.'

'[This] book provides a welcome contribution both to art history and to the history of science, which in the last decade has developed a great interest in visual culture.'