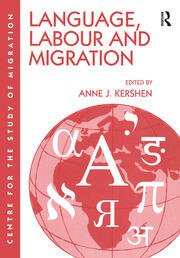 Language, Labour and Migration explores two fundamental aspects of the migrant experience through a multi-disciplinary lens which combines the research of leading academics at the cutting edge of their fields. This latest volume from the centre for the Study of Migration brings together the work of anthropologists, economists, geographers, historians, political scientists and medical practitioners. Essays explore topics which include the role of mother tongue as a bridge to assimilation, the racialization of immigrants and refugees through language, the patterns of resistance undertaken by lascars, the experience of black British seamen in the eighteenth century, health advocacy in the twentieth century and the way in which cyber-space is being used to rediscover ethnic identity in the twenty-first century. Other essays examine Chinese labour in France during the First world war, employment opportunities for those deficient in the majority language and poverty in old age. All provide new and at times controversial, insights into the problems of language and labour in an alien society.

Contents: Introduction, Anne J. Kershen. Language: Mother tongue as a bridge to assimilation?: Yiddish and Sylheti in East London, Anne J. Kershen; Do not give flowers to a man: refugees, language and power in twentieth century Britain, Tony Kushner; Shamrocks growing out of their mouths: language and the racialization of the Irish in Britain, Bronwen Walter; Health advocacy in medicine, Veronica L.C. White; Becoming a Diaspora: the Welsh experience from Beulah Land to Cyber-Cymru, Wayne Parsons. Labour: I asked how the vessel could go: the contradictory experiences of African and African Diaspora mariners and port workers in Britain, c. 1750-1850, Ian Duffield; Patterns of resistance: Indian seamen in imperial Britain, Shompa Lahiri; From Shangdong to the Somme: Chinese indentured labour in France during World War I, Paul Bailey; It’s not working: refugee employment and urban regeneration, Alice Bloch; Are the UK’s ethnic minorities at a disadvantage when they get older?, Mahmood Messkoub; Index.

Barnet Shine Senior Research Fellow and Director of the Centre for the Study of Migration at Queen Mary and Westfield College, University of London.

’Can greater toleration and integration of immigrants in Britain arise if we open our society to the voices of others? This seems like a reasonable proposition. However, what if the majority receives these voices as noise, an unintelligible and alien sound? In these pages Anne Kershen allows the previously-muted sounds of Yiddish-speakers, Syletis, Welsh, Irish, Germans, Lascars and Black Jacks (African mariners) to be heard as voices, perhaps for the first time for many readers. This pioneering collection shows how mother tongues can sometimes act as a bridge to acceptance and mobility, but often end as a cul de sac where only the sounds of silence, isolation and reluctant conformity are heard.’ Robin Cohen, University of Warwick, UK ’This wide-ranging collection of essays views the vicissitudes of ethnicity and race in modern Britain through the twin prisms of labour and language. Lively, engaging and richly documented, they move the discussion of how minority groups respond to challenging circumstances to a new level of sophistication and complexity.’ Professor Todd Endelman, University of Michigan, USA 'Perhaps its strongest point is the way it illustrates the breadth of issues surrounding the use of language as a tool for communication. Another strength of the book is its ability to tie together cultural, economic and political themes. Overall it is an important book given today's political, economic and cultural climate. Migration is set to increase and it is vital for us to gain a better understanding of these issues. This book acts as an important first step in doing so. The variety of illustrative examples also make it a fascinating read.' Black and Asian Studies Association Newsletter '...a collection of interesting and often provocative contemporary and historical cases studies of migrant communities language and labor.' Progress in Human Geography 'This book is a mine of information and it is highly recommended to sch