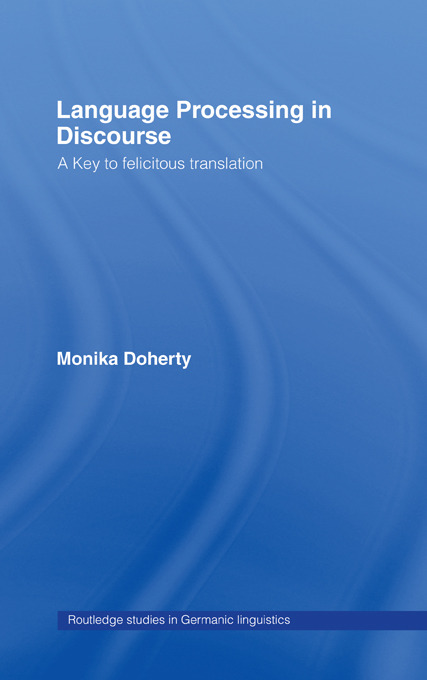 This book argues that language systems determine language use to a greater extent than is generally assumed. The author demonstrates how the typological characteristics of a language determine even the most general aspects of our stylistic preferences.

Through extensive analysis of examples in German and English, the author demonstrates how analogous options of sentence structure must be surrendered in order to achieve felicitous translations. Two major aspects that determine the appropriateness of language use are examined: language processing and discourse-dependency.

Essential reading for translation scholars and linguists involved in the comparative study of English and German, this book will also be of interest to scholars of psycholinguistics and cognitive science, as well as translators and linguists more generally.

Monika Doherty began her career with the study of English, Russian and General Linguistics in Berlin (PhD in 1969, Professor in 1981). She concentrated on semantics, later pragmatics, and translation. In 1990 she was appointed Professor for Translation Theory. Two major publications contributed to her success with a wider readership: Übersetzen (2nd ed. 1997) and Das grammatische Varieté (4th ed. 1998).

The Germanic languages are among the best described in the world and exhibit a considerable degree of variation. Yet, with the exception of English, their properties and structural variance have yet to be fully exploited for linguistic theory. The purpose of this series is to promote more intense interaction of general linguistics with the field of Germanic linguistics as a whole.