Last Lectures on the Prevention and Intervention of Genocide 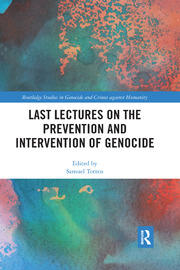 Last Lectures on the Prevention and Intervention of Genocide

Last Lectures on the Prevention and Intervention of Genocide is a collection of hypothetical ‘last lectures’ by some of the top scholars and practitioners across the globe in the fields of human rights and genocide studies. Each lecture purportedly constitutes the last thing the author will ever say about the prevention and intervention of genocide.

The contributions to this volume are thought-provoking, engaging, and at times controversial, reflecting the scholars’ most advanced thinking about issues of human rights and genocide.

This book will be of great interest to professors, researchers, and students of political science, international relations, psychology, sociology, history, human rights, and genocide studies.

2. "To Act or Not to Act Immediately? Is There Really a Question?" by Agnieszka Bieńczyk-Missala (Assistant Professor, Institute of International Relations, University of Warsaw, Poland)

4. "When Outsiders Are Threats: How to Move Beyond a Culture of Fear to a Shared Sense of Humanity" by Carla Barqueiro (Assistant Professor, School of Public and International Affairs, University of Baltimore, Maryland)

B. Critical Factors Vis-à-vis Issues of Prevention and Intervention

6. "The Foot Soldiers of Evil – On the Importance of Individual Perpetrators in Genocide Prevention" by Timothy Williams (Research Fellow, Centre for Conflict Studies, Marburg University, Germany)

II. Lack of Political Will Is Not the Only Obstacle to Preventing Genocide

9. "Will the World Ever Be Interested In Stopping Atrocities?" by Kurt Mills

10. "How Three Common Misconceptions Get in the Way of Preventing Genocide"

11. "When Are We All Truly Going to Get Serious?" by Samuel Totten

III. Commentary on Past and Current Approaches to Prevention and Intervention

IV. Innovations Still to Be Considered/Implemented

16. ÒLocal Structures of Prevention and the Obligation to Prevent Genocide as an Individual RightÓ by Ekkehard Strauss (Former Human Rights Officer, the U.N. Office of the High Commissioner for Human Rights; University of Griffith, Queensland, Australia)

19. "The Time Has Come for Genocide Scholars to Innovate: The Critical Need to Develop and Implement New and Unique Tools for Prevention" by Israel W. Charny (Executive Director, Institute on the Holocaust and Genocide, Jerusalem, Israel)

20. "Putting Moral Agency and the Precautionary Principle to Work for the Prevention of Genocide and Its Incitement" by Elihu D Richter (Associate Professor, Hadassah School of Community Medicine and Public Health, Hebrew University, and the Jerusalem Center for Genocide Prevention, Jerrusalem, Israel)

25. "Lessons Staring Us in the Face" by Linda Melvern (Researcher, Author, and Journalist, London, England)

28. "Why the (Western) Cavalry Isn’t Coming and What We Can Do About It" by

29. "‘So the World May Know All’: The Importance of Education for Genocide Prevention" by Deborah Mayersen (Vice Chancellor's Postdoctoral Research Fellow, The Institute for Social Transformation Research, Faculty of Law, Humanities and the Arts, University of Wollongong, New South Wales, Australia)

30. "All the Candidates Agreed About Darfur, and Then …." by John Hagan (John D. MacArthur Professor of Sociology and Law, Northwestern University, Evanston, Illinois)

32. "From the Clenched Fist to the Open Hand: A Last Lecture and First Lesson from Critical Genocide Prevention Studies" by Alexander Laban Hinton (Director of the Center for the Study of Genocide and Human Rights & Professor, Departments of Anthropology and Global Affairs, Rutgers University, Newark, New Jersey)

33. "Genocide Structures the Very World We Live In" by Henry C. Theriault

34. "My Last Lecture: Some Central Elements of Prevention" by Ervin Staub (Professor Emeritus, Department of Psychology, University of Massachusetts, Amherst)

35. "The Withdrawal of States from the International Criminal Court: A Potential Set Back in Relation to the Prevention of Genocide and Crimes Against Humanity?" by Etienne Ruvebana (Senior Lecturer, School of Law, University of Rwanda, Kigali, Rwanda)

Samuel Totten is Professor Emeritus at the University of Arkansas, USA. In July and August 2004, he was one of 24 investigators on the US State Department’s Atrocities Documentation Project, and in 2008 he served as a Fulbright Scholar at the Centre for Conflict at the National University of Rwanda.