Late Antiquity on the Eve of Islam 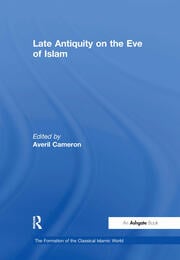 Late Antiquity on the Eve of Islam

This volume reflects the huge upsurge of interest in the Near East and early Islam currently taking place among historians of late antiquity. At the same time, Islamicists and Qur'anic scholars are also increasingly seeking to place the life of Muhammad and the Qur'an in a late antique background. Averil Cameron, herself one of the leading scholars of late antiquity and Byzantium, has chosen eleven key articles that together give a rounded picture of the most important trends in late antique scholarship over the last decades, and provide a coherent context for the emergence of the new religion. A substantial introduction, with a detailed bibliography, surveys the present state of the field, as well as discussing some recent themes in Qur'anic and early Islamic scholarship from the point of view of a late antique historian. The volume also provides an invaluable introduction to recent scholarship, making clear the ferment of religious change that was taking place across the Near East before, during and after the lifetime of Muhammad. It will be essential reading for Islamicists and late antique students and scholars alike.

'... The work included here remains influential ...' Bryn Mawr Classical Review '... a valuable repository of (mostly) Anglophone scholarship on early Islam and a tremendously helpful resource for libraries, not least because of the admirable Variorum practice of maintaining the formatting and pagination of original articles throughout.' Medieval Archaeology