Late Night with Trump
Political Humor and the American Presidency 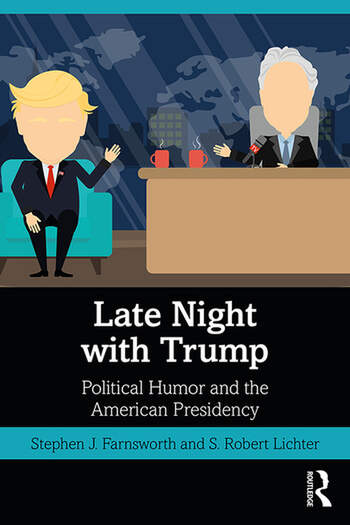 Late Night with Trump: Political Humor and the American Presidency

Political humor has been a staple of late-night television for decades. The Trump White House, however, has received significantly greater attention than that of past presidents, such as Barack Obama, George W. Bush, and even Bill Clinton. In response to Trump’s strident politics, late-night comics, including Stephen Colbert, Jimmy Kimmel, Trevor Noah and Jimmy Fallon, have sounded key policy notes, further blurring the boundary between news and satire. Weekly humorists, including John Oliver and Samantha Bee, extend the critique with in-depth probing of key issues, while Saturday Night Live continues to tap the progression from outrage to outrageousness.

Using unique content analysis techniques and qualitative discussions of political humor, Farnsworth and Lichter show how late-night political humor, and these seven programs in particular, have responded to the Trump presidency. Employing a dataset of more than 100,000 late night jokes going back decades, these noted media scholars discuss how the treatment of Trump differs from previous presidents, and how the Trump era is likely to shape the future of political humor. The authors also employ public opinion survey data to consider the growing role these late-night programs play in framing public opinion and priorities. This book will interest scholars, the curious public, and students of politics, communications and the media, and contemporary American culture.

1. The Importance of Political Humor

4. How POTUS Plays on Late Night

6. The (Near) Future of Political Humor

Stephen J. Farnsworth is Professor of Political Science and International Affairs and Director of the Center for Leadership and Media Studies at the University of Mary Washington. He holds a PhD in Government from Georgetown and is the author or co-author of seven books on the presidency and the mass media, as well as dozens of articles on US and Virginia politics. He is a recipient of the State Council of Higher Education for Virginia’s Outstanding Faculty Award and has served as a Canada–US Fulbright Research Chair at McGill University in Montreal and as a Fulbright Specialist at Methodist College in Kuala Lumpur, Malaysia.

is Professor of Communication at George Mason University, where he directs the Center for Media and Public Affairs. He has authored or co-authored over a dozen books and numerous scholarly and popular articles and monographs on the media and politics. He holds a PhD in Government from Harvard and has served on the faculties of Yale, Columbia, Princeton, Georgetown and George Washington University. His most recent book is Politics Is a Joke! How Comedians Are Remaking Political Life (with Jody Baumgartner and Jonathon Morris).

This is a serious book about political humor—but it’s also guaranteed to give you some hearty laughs. Steve Farnsworth and Bob Lichter have produced a thoroughly researched look at late-night comedy. We’ve come a long way since the gentle jokes of Johnny Carson. For good or ill, contemporary TV comics have a sharp, outsized role in shaping public perceptions of candidates and officeholders. This astute volume will have readers in stitches as they recall jokes and skits surrounding the 2016 election, and it is also an excellent primer as we head into 2020.

Based on a massive content analysis of thousands of late-night political jokes from the past seven Presidential election cycles, Farnsworth and Lichter offer the most sweeping assessment of the evolution of late-night political humor that the field has seen to date. With national public opinion data alongside observations about the changing tone of late-night comedy under the Trump Presidency, Late Night with Trump: Political Humor and the American Presidency is an essential addition to the libraries of scholars and student of political communication and entertainment.

There is little doubt that late-night television programming plays an important role in US politics, both as an opportunity for publicity for politicians, and as a source of humor and commentary about current politics. Drawing on an impressive body of data on the content of major late-night programs, Farnsworth and Lichter offer an important and fascinating account of the history, functions and impact of this television genre, with a focus on the recent Trump-fuelled peak in late-night political humor.

Late night humorists have become prominent political actors. In this timely and comprehensive work, Farnsworth and Lichter document how comics have emerged as a "second front" in the contentious relationship between politicians and the press and have exacerbated the culture of public ridicule. They demonstrate how changing news norms have facilitated the rise of political comedy and provide rich historical context that sets the stage for understanding late night humor focused on Donald Trump. The rich empirical analysis of both the content of late night comedy and its effects on the public adds rigor to the study and brings fresh insights to research in this field.

is must reading. It’s unmatched in its evidence and analysis and for what it reveals about Trump, our politics, and the blurred line between news and political humor. Farnsworth and Lichter have long been known for their rigorous and imaginative content analysis, and this book adds mightily to their richly deserved reputation.