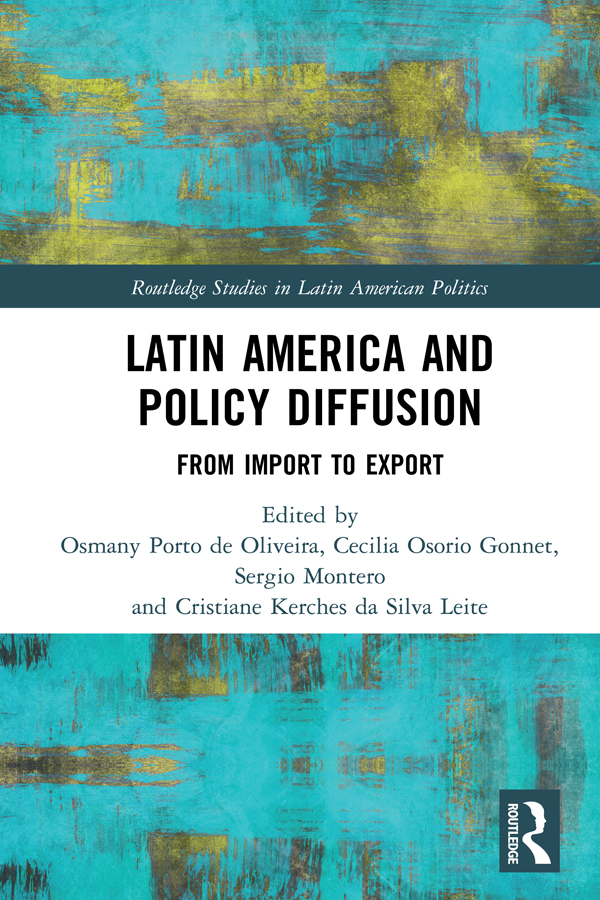 From Import to Export, 1st Edition

Latin American countries have for a long time been importers of public policies and institutions from the Global North. The colonial legacy and resulting patterns of international relations during the 20th century favoured a course of adoption and hybridization of political institutions. In recent decades, a new conjuncture has emerged in which Latin American policies have started to diffuse South-South and even South-North.

Led by Brazil with Participatory Budgeting and the Bolsa Familia program, other countries in the region soon followed. The Bus Rapid Transit (BRT) system and bicycle policies in Curitiba and Bogotá have also reached wide international recognition and circulation. And yet, despite Latin America’s new role as a policy "exporter", little is known about its dynamics, causes, and effects. Why have Latin American policies been diffused inside and outside the region? Which actors are involved? What driving forces affect these processes? This innovative collection offers a new perspective on the policy diffusion phenomena. Drawing on different examples from Latin American experiences in urban local policies and national social policies, experts present a new framework to study this phenomenon centered on the mobilization of ideas, interests and discourses for policy diffusion.

will be of great interest to researchers, educators, advanced students and practitioners working in the fields of political science, public policy, international relations and Latin American Studies.

"Assembling a stellar cast of policy researchers this piece uses Latin America as a laboratory to help us understand and explain the various ways in which countries from the Global South export and transfer strong policy innovations across borders. This book achieves its goal of showcasing how Latin American countries have moved beyond what was considered a traditionally receptive role in the field of policy diffusion to an active one where these countries purposefully share the lessons, successes and failures that have emerged from their implementation of specific public policies. A timely volume that will help scholars in the fields of comparative politics, public administration and public policy as well as practitioners interested in transferring policies across countries, cities, and regions" — Raul Pacheco-Vega, Assistant Professor, Public Administration Division, Centro de Investigación y Docencia Económicas

2. How are Conditional Cash Transfer Programs disseminated and adopted in Latin America? A proposal for the mechanisms of diffusion,

3. The Diffusion of Public Policies and the Bolsa Familia Program in Light of the Mexican Experience Cristiane Kerches da Silva Leite,

4. Regional diffusion of Brazilian social and rural public policies in Latin America and the Caribbean,

7. The diffusion of Brazilian Participatory Institutions: From Innovation to Internationalization

8. Importing the Participatory Budgeting Model from Porto Alegre to La Marsa: The Circulation and Appropriations of a Policy Device

9. Policy Transfer and Resistance: Proposals for a New Research Agenda

Cecilia Osorio Gonnet is Assistant Professor of Political Science and Public Policies at the Politics and Government Department, at the Alberto Hurtado University, Chile. Her research and teaching expertise are in public policy, social policies, dissemination of public policies, citizen participation and knowledge, ideas and public policies.

is Associate Professor of Urban and Regional Development at the Universidad de Los Andes in Bogotá, Colombia. His research interests are in the politics and governance of urban and regional planning; the local and global dynamics behind the circulation, learning and adoption of urban policy models; and local and regional economic development strategies, with an emphasis in Latin American cities and regions.