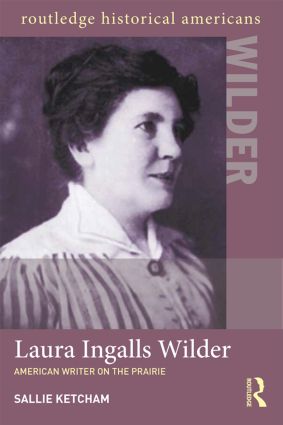 Laura Ingalls Wilder wrote stories that have defined the American frontier for generations of readers. As both author and character in her own books, she became one of the most famous figures in American children’s literature. Her famous Little House on the Prairie series, based on her childhood in Wisconsin, Kansas, Minnesota, and South Dakota, blended memoir and fiction into a vivid depiction of nineteenth-century settler life that continues to shape many Americans’ understanding of the country’s past. Poised between fiction and fact, literature and history, Wilder’s life is a fascinating window on the American West.

Placing Wilder’s life and work in historical context, and including previously unpublished material from the Wilder archives, Sallie Ketcham introduces students to domestic frontier life, the conflict between Native Americans and infringing white populations, and the West in public memory and imagination.

"I found Laura Ingalls Wilder: American Writer on the Prairie well researched. Laura Wilder's lifelong values of honesty and hard work are evident throughout the biography. … Sallie Ketcham provides us with a fair portrayal of the Laura we all knew."

"Students will appreciate this straightforward and highly readable biography. It situates Wilder in the broader context of decades of dramatic changes in the West. The primary sources included with the text make it an excellent classroom resource."

—Sheila McManus, author of Choices and Chances: A History of Women in the U.S. West

—Andrea R. Foroughi, author of Go If You Think it Your Duty: A Minnesota Couple’s Civil War Letters

Ketcham makes use of previously unpublished archival material in this insightful introduction to the celebrated author’s life. Placing Wilder’s life and experiences in historical context, Ketcham explains her ongoing relevance to children, environmentalists, feminists, historians, literary scholars, political thinkers, and others who identify with Wilder and claim her as one of their own."

Sallie Ketcham is an independent scholar and writer from Minnesota.