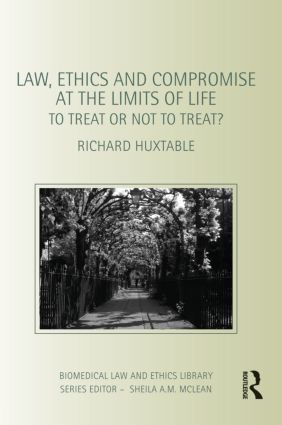 Law, Ethics and Compromise at the Limits of Life

To Treat or not to Treat?, 1st Edition

A conflict arises in the clinic over the care of a critically ill, incapacitated patient. The clinicians and the patient’s family confront a difficult choice: to treat or not to treat? Decisions to withdraw or withhold life-sustaining treatment feature frequently in the courts and in the world's media, with prominent examples including the cases of Charlotte Wyatt, in the UK, and Terri Schiavo, in the USA. According to legislation like the Mental Capacity Act 2005, the central issues are the welfare (or ‘best interests’) of the patient, alongside any wishes they might have conveyed, via an ‘advance directive’ or through the appointment of a ‘lasting power of attorney’.

Richard Huxtable argues that the law governing both welfare and wishes frequently fails to furnish clinicians and families with the guidance they require. However, he finds this unsurprising, given the competing ethical issues at stake. Huxtable proposes that there is a case for ‘principled compromise’ here, such that the processes for resolving principled disputes take precedence. He argues for greater ethical engagement, through a reinvigorated system of clinical ethics support, in which committees work alongside the courts to resolve the conflicts that can arise at the limits of life.

Providing a comprehensive account of the law pertaining to children and adults alike, and distinctively combining medico-legal and bioethical insights, this book engages scholars and students from both disciplines, as well as informing clinicians about the scope (and limits) of law at the limits of life.

"Richard Huxtable’s splendid book demonstrates why such conversations are crucial […] Its structure is logical and easily comprehensible, and the writing always lucid and accessible. […] He knows the literature, but this is no treatise from an ivory tower. He has also paced the wards and is invigoratingly practical." Charles Foster, University of Oxford

"Richard Huxtable’s recent book on withdrawing treatment (Law, Ethics and Compromise at the Limits of Life: To Treat or Not to Treat?) provides a perfect companion to his 2007 book on euthanasia (Euthanasia, Ethics and the Law: From Conflict to Compromise). Together the two books present a thoughtful and clear exposition of the middle ground in the ethical and legal debate surrounding end of life decision-making. Specifically, Huxtable argues for compromise. This leads him to defend ‘the ethical compromise the law seeks to achieve between multiple values’, while also arguing for some significant changes to facilitate the search for compromise, including the creation of a new offence of mercy killing (in the 2007 book), and an enhanced role for clinical ethics committees (in the 2013 book)." - Elizabeth Wicks, European Journal of Health Law 22 (2015) 309-314

Richard Huxtable is Reader in Medical Ethics & Law and Deputy Director of the Centre for Ethics in Medicine, University of Bristol. His many publications include Euthanasia, Ethics and the Law: From Conflict to Compromise (Routledge-Cavendish, 2007) and (with Dickenson & Parker) The Cambridge Medical Ethics Workbook (CUP, 2nd edn, 2010). A longstanding contributor to clinical ethics support, Richard is also a Trustee of the National Council for Palliative Care and chair of its Ethics Forum.