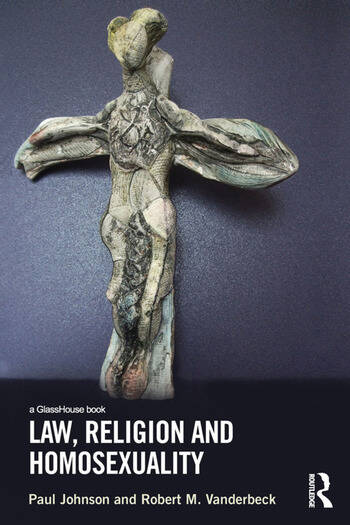 Law, Religion and Homosexuality is the first book-length study of how religion has shaped, and continues to shape, legislation that regulates the lives of gay men and lesbians . Through a systematic examination of how religious discourse influences the making of law – in the form of official interventions made by faith communities and organizations, as well as by expressions of faith by individual legislators – the authors argue that religion continues to be central to both enabling and restricting the development of sexual orientation equality. Whilst some claim that faith has been marginalized in the legislative processes of contemporary western societies, Johnson and Vanderbeck show the significant impact of religion in a number of substantive legal areas relating to sexual orientation including: same-sex sexual relations, family life, civil partnership and same-sex marriage, equality in employment and the provision of goods and services, hate speech regulation, and education. Law, Religion and Homosexuality demonstrates the dynamic interplay between law and religion in respect of homosexuality and will be of considerable interest to a wide audience of academics, policy makers and stakeholders.

Introduction  1. Religion and the legal regulation of homosexual sex  2. The boundaries of the family: religion and same-sex parenting  3. Religious exemptions from sexual orientation equality  4. The secular and the sacred: civil partnership and same-sex marriage  5. Homophobic hate speech and freedom of religious expression  6. Religion, homosexuality and state education  Conclusion

Paul Johnson is Professor of Sociology at the University of York.

Robert M. Vanderbeck is Senior Lecturer in Human Geography at the University of Leeds.

"Law, Religion and Homosexuality is an engaging work that brings our attention to the complexities of religion in shaping laws designed to recognise and remedy (homo)sexual orientation discrimination. As religion and homosexuality continue to press upon the law as subjects seeking accommodation, the book reminds us that it is necessary to avoid stereotypes and binaries. The book testifies to the significant gains that have been made in the area of same-sex law reform in the United Kingdom over the last 50 years. Yet, Johnson and Vanderbeck remind us that we must not overstate ideas of progress or compromise lest we exclude sexual minorities who still seek justice." Senthorun Raj, University of Sydney, European Human Rights Law Review (2016).

"In Law, Religion and Homosexuality, the authors offer a novel study of the ways in which religion has influenced, and continues to influence, legislation affecting the lives of gay men and lesbians. The writers trace this connection by examining the role of religious discourse in the making of statutory law by the UK Parliament […] Hansard is frequently and meticulously cited to illustrate the nature of parliamentary discussion […] [A] well-researched and highly interesting book which straddles a variety of disciplines – primarily sociology, law and politics. It is clearly written and certainly accessible to non-specialists in those fields. The authors make a clear and persuasive case that religion, as articulated in various forms by parliamentary figures, has had a long-lasting effect on the expansion of laws protecting homosexuality. Law, Religion and Homosexuality offers a revealing insight into the writing, and re-writing, of laws relating to homosexuals in the name of religion. It is a thought-provoking contribution to scholarly debates on the accommodation of religion by law in matters of sexual orientation." Matthew Gibson, Ecclesiastical Law Journal (2015) 17:382 – 385.

" […] Johnson and Vanderbeck demonstrate how religious distaste towards homosexuality permeates law-making, even if its precise expression has had to evolve in response to changing societal norms. Law, Religion and Homosexuality is a valuable resource for anyone concerned with lesbian and gay equality and with the role of religion in lawmaking. The book joins a growing body of literature in this topical and controversial field, offering a sound practical illustration of discourse analysis as a critical tool, rather than a purely theoretical discussion. It provides additional evidence to support critiques of current demands for anti-gay discrimination to be ‘reasonably accommodated’ within equality law […] It rebuts earlier suggestions that the history of lesbian and gay oppression simply illustrates the confusion of religious beliefs with popular prejudice […] And it responds to commentators […] who wish to safeguard religion against increasing ‘juridification’, by revealing a modern history of the juridification of homosexuality". Stella Coyle, Feminist Legal Studies (2015) 23:111–115.

"Through the innovative approach of a detailed examination of debates in the UK Parliament, this book provides an in-depth analysis of how legislation that regulates the lives of gay men and lesbians has been shaped by religious discourse over time […] The authors’ approach enables them very clearly to demonstrate how the language and arguments used by supporters and opponents of the legislation evolved over time; they are also able to show how some individual members of the House of Commons (and especially the House of Lords) frequently intervened in key debates and how their individual arguments changed (or did not change) over time […] The authors’ detailed scrutiny of the debates in both Houses is very impressive and their extensive use of direct quotations particularly effective […] It is clearly written and is accessible to both specialist and nonspecialist readers. It also provides a very important alternative perspective to those who argue that religion has been marginalized in society. The authors state that it is aimed at academics, policy makers, and stakeholders alike and all three groups would benefit from reading this important analysis of the complex relationship between law, religion, and homosexuality." David Perfect (University of Chester), Social and Legal Studies, 2016.