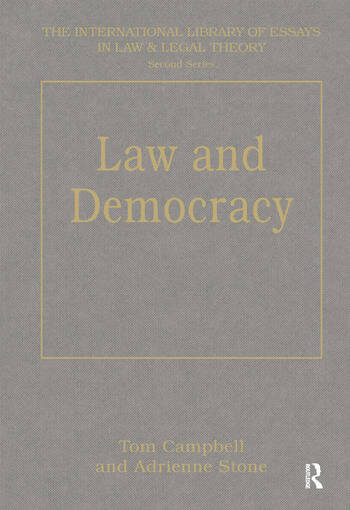 The study of law is a branch of the study of politics. Even those who emphasize the autonomy of law, either sociologically or normatively, must acknowledge that this is a position that requires justification within a broader theory of politics that either explains or justifies this autonomy. Inevitably, therefore, developments in political life and in political philosophy have a significant effect on the practice of law and its theoretical study. Currently this relationship is evident in the impact of recent developments in the practice and theory of democracy that are redolent with implications for law and legal theory. This collection represents the body of captivating literature that is engaged not only with current developments in law and politics but also with the rediscovery of traditional theories. It offers a way into an engaging and important debate that bears of the most fundamental issues within both legal and political theory.

'Campbell and Stone have amassed an impressive collection of authors...As a collection of seminal essays in the realm of western constitutional philosophy, this book is useful.' The Law and Politics Book Review '...a rich collection.' South African Journal on Human Rights