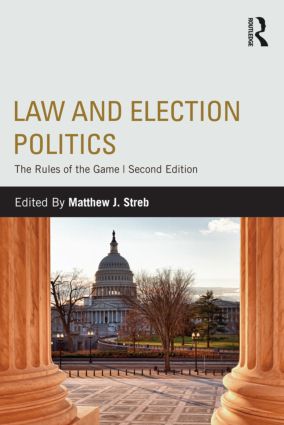 The Rules of the Game, 2nd Edition

Though the courts have been extremely active in interpreting the rules of the electoral game, this role is misunderstood and understudied—as, in many cases, are the rules themselves. Law and Election Politics illustrates how election laws and electoral politics are intertwined, analyzing the rules of the game and some of the most important—and most controversial—decisions the courts have made on a variety of election-related subjects.

More than a typical law book that summarizes cases, Mathew Streb has assembled an outstanding group of scholars to place electoral laws and the courts‘ rulings on those laws in the context of electoral politics. They comprehensively cover the range of topics important to election law—campaign finance, political parties, campaigning, redistricting, judicial elections, the Internet, voting machines, voter identification, ballot access, and direct democracy. This is an essential resource both for students of the electoral process and scholars of election law and election reform.

"Streb has assembled a volume which needs to be on the bookshelf of everyone who studies the intersection of law and electoral politics. The completely fresh second edition of Law and Election Politics consistently provides insight and wisdom from some of the brightest minds working in election law, on issues ranging from political parties to voter identification laws to judicial elections to direct democracy. Professors, graduate students, and undergraduates will all learn a great deal."

"Just in time for the 2012 elections, Matt Streb and the contributors to this volume have integrated political and legal analyses to enrich understanding of elections in the United States. The authors address important questions of electoral democracy—incorporating historical and current data to demonstrate how laws and legal decisions impact politics. The volume is very readable and thought-provoking and an excellent selection for courses on elections or for anyone interested in the fate of American electoral democracy."

"Law and Election Politics is an excellent book in which leading scholars report on the latest developments in election law and political campaigns. This well-written volume clearly explains the legal basis for modern campaigns and the voting experience."

"A wide ranging collection of essays on contemporary election law topics and controversies. Students, scholars, and concerned citizens looking for introductions to these topics will find it an invaluable resource."

"This is a terrific collection of essays, sure to become an invaluable resource to scholars who teach or do research on elections. Finally, I can answer all of those troubling questions student ask about legal aspects of elections!"

Matthew J. Streb is Associate Professor of Political Science and chair of the Department of Political Science at Northern Illinois University. He is the author of two books, The New Electoral Politics of Race (University of Alabama, 2002) and Rethinking American Electoral Democracy (Routledge, 2008, 2011). He is the editor of Running for Judge (New York University Press, 2007), Academic Freedom at the Dawn of a New Century (Stanford University Press, 2006), and Polls and Politics (SUNY Press, 2004), and has published numerous articles and book chapters.