Law and Religion, An Overview
Volume I 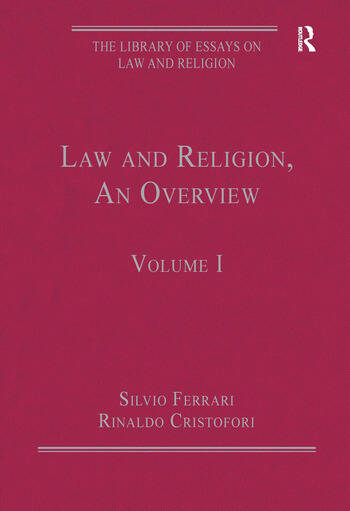 Law and Religion, An Overview: Volume I

The focus of this volume is on the historical and geographical elements of law and religion. The first part delineates and analyzes the relation between church and state from the Gregorian Revolution to the human rights era and gives a sense of the evolution of the church and state relationship, whilst the second part explores law and religion issues around the world. The volume redresses the tendency towards a western-centric approach in the discipline by including essays from regional experts which present local approaches to law and religion in Asia, Africa, and South America. The collection is unique in that it brings together wide-ranging case studies and out-of-print papers and is an important resource for established and new scholars in the field.

Contents: Introduction, Silvio Ferrari: Part I Law and Religion in the West: Origins: The Gregorian Revolution:The origin of the western legal tradition in the Papal revolution, Harold J. Berman; The Protestant Revolution: Introduction and Concluding Reflections, John Witte Jr; The American and French Revolutions: Religion during the American Revolution and the early Republic, Carl H. Esbeck; The breach , René Remond. Part II Law and Religion in the West: Modern Transformations: The Liberal State: On liberalism, Owen Chadwick; From the Liberal State to the Welfare State: Separation of Church and State in contemporary European society, Silvio Ferrari; The Communist Regimes: Eastern Christianity and the Cold War: an overview, Lucian N. Leustean; The Age of Democracies: Religious changes, Samuel P. Huntington; Religion in a Plural and Global World: Religion challenging the myth of secular democracy, José Casanova. Part III States and Religions: Law and Religion in Western Europe: A framework for the comparative analysis of Church-State relations in Europe, John T.S. Madeley; Towards a ’common law’ on religion in the European Union, Norman Doe; Law and Religion in Eastern Euriope: A comparative analysis on Church-State relations in Eastern Orthodoxy: concepts, models and principles, Daniela Kalkandjieva; Law and Religion in Scandinavian Countries: Not even believing in belonging: states and churches in five North-European (post-)Lutheran countries, Lisbet Christoffersen; Law and Religion in the United States: Church and State in the United States: competing conceptions and historic changes, Douglas Laycock; Law and Religion in India: Religion, law and judiciary in modern India, Tahir Mahmood; Law and Religion in Israel: Law and religion under the status quo model: between past compromises and constant change, Daphne Barak-Erez; Law and Religion in Turkey: The protection of laicism in Turkey and the Turkish Constitutional Court: the example of the prohibition on th