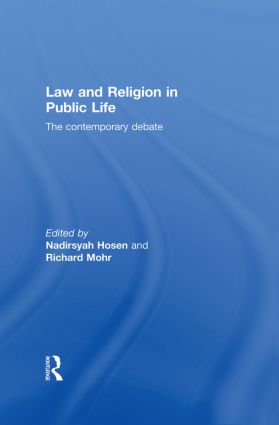 Law and Religion in Public Life

With religion at centre stage in conflicts worldwide, and in social, ethical and geo-political debates, this book takes a timely look at relations between law and religion. To what extent can religion play a role in secular legal systems? How do peoples of various faiths live successfully by both secular laws as well as their religious laws? Are there limits to freedom of religion? These questions are related to legal deliberations and broader discussions around secularism, multiculturalism, immigration, settlement and security.

The book is unique in bringing together leading scholars and respected religious leaders to examine legal, theoretical, historical and religious aspects of the most pressing social issues of our time. In addressing each other’s concerns, the authors ensure accessibility to interdisciplinary and non-specialist audiences: scholars and students in social sciences, human rights, theology and law, as well as a broader audience engaged in social, political and religious affairs. Five of the book’s thirteen chapters address specific contemporary issues in Australia, one of the most ethnically diverse countries in the world and a pioneer of multicultural policies. Australia is a revealing site for contemporary studies in a world afraid of immigration and terrorism. The other chapters deal with political, legal and ethical issues of global significance. In conclusion, the editors propose increasing dialogue with and between religions. Law may intervene in or guide such dialogue by defending the free exchange of religious ideas, by adjudicating disputes over them, or by promoting a civil society that negotiates, rather than litigates.

1. Introduction: Da Capo: law and religion from the top down, Richard Mohr and Nadirsyah Hosen Part 1: Law state and secularism 2. Classifying church–state arrangements – beyond religious versus secula, Darryn Jensen 3. Christian origins of secularism and the rule of law, Richard Mohr 4. The future of secularism: a critique, Margaret Davies Part 2: Religion and speech in a pluralist society 5. Religion, multiculturalism and legal pluralism, Frank Brennan SJ 6. Religion and freedom of speech in Australia, Katharine Gelber 7. The reasonable audience of religious hatred – the semiotic ideology of anti-vilification laws in Australia, Massimo Leon Part 3 Religion as a factor in legal processes and decisions 8. Religion and security: what’s your motive?, Nadirsyah Hosen 9. Religion and justice: atonement as an element of justice in both western law and Christian thought, Cassandra Sharp 10. Why should I do this? Private property, climate change and Christian sacrifice, Paul Babie Part 4: Negotiating religious law and personal beliefs 11. Jewish law in a modern Australian context, Rabbi Jeremy Lawrence 12. Does Australia need a mufti? Analyzing the institution of ifta in an Australian contemporary context, Mohamad Abdalla Afterword: A posteriori: the experience of religion, Nadirsyah Hosen and Richard Mohr

Dr Nadirsyah Hosen is senior lecturer at the Faculty of Law, University of Wollongong, Australia.

Dr Richard Mohr is Director of the Legal Intersections Research Centre at the University of Wollongong, Australia, and Managing Editor of the interdisciplinary journal Law Text Culture.