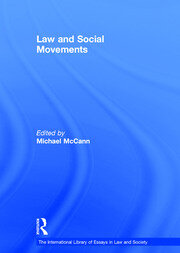 The work of both socio-legal scholars and specialists working in social movements research continues to contribute to our understanding of how law relates to and informs the politics of social movements. In the 1990s, an important line of new research, most of it initiated by those working in the law and society tradition, began to bridge the gaps between these two areas of scholarship. This work includes new approaches to group ’legal mobilization’ politics; analysis of the judicial impact on social reform struggles; studies of individual legal mobilization in civil disputing and an almost entirely new area of research in ’cause lawyering’. It brings together the best of this research introduced by a detailed essay by the editor.

Michael McCann is Gordon Hirabayashi Professor for the Advancement of Citizenship at the University of Washington, Seattle, USA. A former chair of the Political Science Department, he is the Founding Director of the Comparative Law and Society Studies (CLASS) Center as well as Director of the recently reconstructed undergraduate Law, Societies, and Justice program. McCann has written several books, and is presently working on several new projects that analyze how the saturation of mass culture with particular narratives about law undercuts the progressive, democratic possibilities of rights-based legal mobilization politics.

'...a worthy contribution, both to the study of law and social movements specifically and to the study of law and society generally.' The Law and Politics Book Review 'The real value of this collection lies in bringing diverse sources together in a single convenient volume and thus allowing the debate over the nature and effectiveness of "legal mobilization" to flourish.' British Journal of Criminology