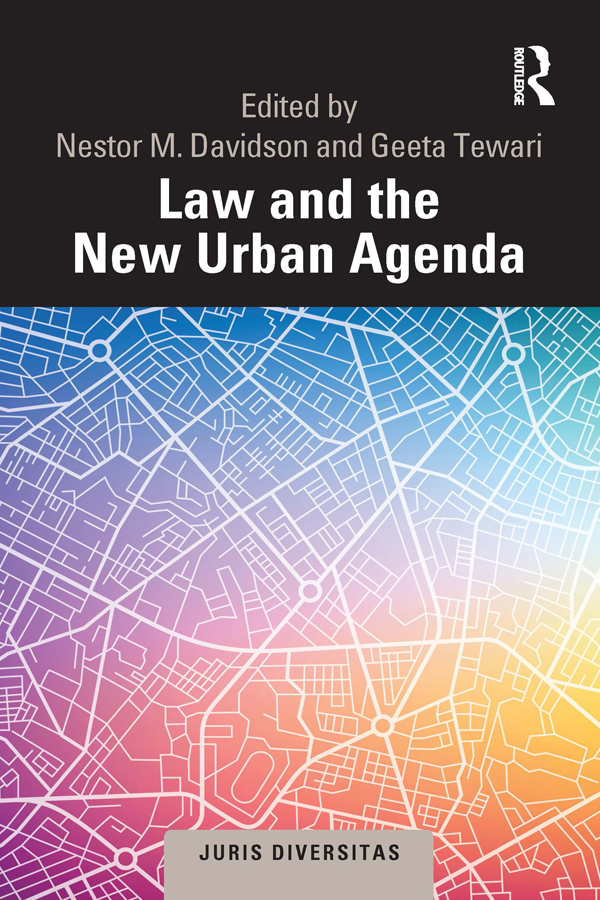 Law and the New Urban Agenda

The New Urban Agenda (NUA), adopted in 2016 at the United Nations Conference on Housing and Sustainable Urban Development (Habitat III) in Quito, Ecuador, represents a globally shared understanding of the vital link between urbanization and a sustainable future. At the heart of this new vision stand a myriad of legal challenges – and opportunities – that must be confronted for the world to make good on the NUA’s promise. In response, this book, which complements and expands on the editors’ previous volumes on urban law in this series, offers a constructive and critical evaluation of the legal dimensions of the NUA. As the volume’s authors make clear, from natural disasters and resulting urban migration in Honshu and Tacloban, to innovative collaborative governance in Barcelona and Turin, to accessibility of public space for informal workers in New Delhi and Accra, and power scales among Brazil’s metropolitan regions, there is a deep urgency for thoughtful research to understand how law can be harnessed to advance the NUA’s global mission of sustainable urbanism.

It thus creates a provocative and academic dialogue about the legal effects of the NUA, which will be of interest to academics and researchers with an interest in urban studies.

A groundbreaking volume on the essential role that law, and law reform, plays in realizing the promise of the New Urban Agenda. The contributors bring to the forefront the different challenges that cities and their leaders face as they endeavor to incorporate more robust citizen participation, protect human rights, sustainably develop to meet the demands of urban migration, and prepare for climate change and other threats to the health and safety of their communities. The range of contributors and the various regions they represent is a strength of the volume and renders it an indispensable starting place for appreciating the legal dimensions of the ambitious New Urban Agenda.

Law and the New Urban Agenda underscores the value of urban law as a discipline in supporting the healthy development of inclusive cities for all. This timely volume sheds light on the many complex challenges that urban growth poses for legal systems around the globe and I commend this eclectic group of scholars for their engagement with the New Urban Agenda.

8 Does the New Urban Agenda provide a stable legal framework for property rights and land use law?

9 Shifting paradigms from between the lines? Legal internalizations of the right to adequate housing in South Africa

is the Albert A. Walsh Chair in Real Estate, Land Use and Property Law at Fordham Law School, and Faculty Director of the Fordham Urban Law Center. Professor Davidson has published widely in the fields of urban law, state and local government, property, and affordable housing. Professor Davidson practiced with the firm of Latham and Watkins and served as Deputy General Counsel at the U.S. Department of Housing and Urban Development. Professor Davidson earned his AB from Harvard College and his JD from Columbia Law School.

is the Director of the Fordham Urban Law Center. Tewari has practiced with the New York City Law Department and the Washington D.C. Office of the Attorney General, and also holds a Master of Fine Arts in Writing from Columbia University. Her literary work has appeared in Granta magazine, New England Review , and other publications. She is a member of the New York Women’s Bar Association’s Advancing the Status of Women Committee and manages the Urban Law Center’s Women in Urban Law Leadership Initiative.

Rooted in comparative law, the Juris Diversitas series focuses on the interdisciplinary study of legal and normative mixtures and movements. The interest is in comparison broadly conceived, extending beyond law narrowly understood to related fields. Titles might be geographical or temporal comparisons and could focus on theory and methodology, substantive law or legal cultures, or could investigate official or unofficial 'legalities', past and present and around the world. And, to effectively cross spatial, temporal, and normative boundaries, inter- and multi-disciplinary research is particularly welcome.