Law's Trace: From Hegel to Derrida 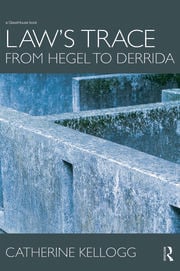 Law's Trace: From Hegel to Derrida

Law's Trace argues for the political importance of deconstruction by taking Derrida’s reading of Hegel as its point of departure. While it is well established that seemingly neutral and inclusive legal and political categories and representations are always, in fact, partial and exclusive, among Derrida’s most potent arguments was that the exclusions at work in every representation are not accidental but constitutive. Indeed, one of the most significant ways that modern philosophy appears to having completed its task of accounting for everything is by claiming that its foundational concepts – representation, democracy, justice, and so on – are what will have always been. They display what Derrida has called a "fabulous retroactivity." This means that such forms of political life as liberal constitutional democracy, capitalism, the rule of law, or even the private nuclear family, appear to be the inevitable consequence of human development. Hegel’s thought is central to the argument of this book for this reason: the logic of this fabulous retroactivity was articulated most decisively for the modern era by the powerful idea of the Aufhebung – the temporal structure of the always-already. Deconstruction reveals the exclusions at work in the foundational political concepts of modernity by ‘re-tracing’ the path of their creation, revealing the ‘always-already’ at work in that path. Every representation, knowledge or law is more uncertain than it seems, and the central argument of Law's Trace is that they are, therefore, always potential sites for political struggle.

Introduction.  Deconstruction is Here, Now, in America; Between Politics and Philosophy.  The Strategic Occupation of the Aufhebung.  The Call of Deconstruction.  Chapter 1: Tracing the Sign  The French Reception of Hegel.  Kojeve’s Hegel.  Hyppolite’s Hegel.  Derrida’s Hegel.  Chapter 2: Signing the Trace  Walter Benjamin and the Language of Names.  Suspended over the Abyss: The Task of the Translator.  Chapter 3: The Messianic without Messianism  Marx and Justice.  Aristotle and the ‘Now’.  From Now ‘til Eternity.  Ghosts and Singularity.  Chapter 4: Mourning Terminable and Interminable: Law and (Commmodity) Fetishism  The Haunting of the Commodity.  ‘Breaks in Gradualness – Leaps!’.  The Haunting of the Law  Chapter 5: Justice, Law and Antigone’s Singular Act  Glas and the Family.  Hegel and The Antigone.  The Law of Law.  ‘The Law of Law, Always in Mourning; Justice/Law and Sexual Complementarity.  Chapter 6: Generalizing the Economy of Fetishism  Freud’s Fetish.  Playing Two Scenes at Once.  Feminism and Deconstruction.  Conclusion: End of Metaphysics: Who is the Friend?.  Rogues, Democracy and Autoimmunity

Catherine Kellogg is an Associate Professor in the Department of Political Science, University of Alberta