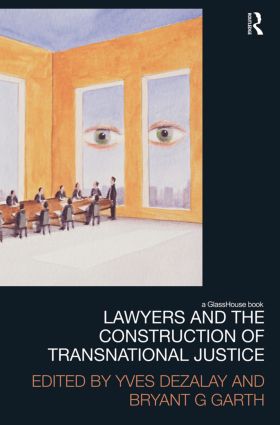 Lawyers and the Construction of Transnational Justice

Lawyers and the Construction of Transnational Justice will show students and scholars what it means in practice to talk about building transnational justice � both on the side of economic regulation and on the side of human rights and humanitarian law. It links national and transnational processes, tracing the activities of lawyers with their successful and less successful strategies to build institutions and credibility for a transnational legal field. Examples include developments in international criminal justice, including the unsuccessful quest to establish universal jurisdiction for the prosecution of human rights violators; the very successful efforts to build transnational trade and intellectual property regimes; and the relative success in building a European legal field. The introductory and concluding chapters by the co-editors, drawing on the sociology of Pierre Bourdieu, link the chapters together and explore the possibilities for a more institutionalized and unified transnational legal field � bridging the economic and corporate side with the human rights and humanitarian side. Addressing a range of international issues, Lawyers and the Construction of Transnational Justice is a major contribution to the field of sociology of law, as well as to debates about global governance.

Introduction: Constructing Transnational Justice, Yves Dezalay and Bryant G. Garth 2. Lawyers, Humanitarian Emergencies, and the Politics of Large Number, Ron Levi and John Hagan 3.The Cause of Universal Jurisdiction: The Rise and Fall of an International Mobilization, Julien Seroussi 4. Lawyering War or Talking Peace? On Militant Usages of the Law in the Resolution of Internal Armed Conflicts: A Case Study of International Alert, Sara Dezalay 5. From Peacebuilding in War-Torn Countries to Justice in the Global North, Sandrine Lefranc 6. Legal Cosmopolitanism Divided: Stating, Codifying, and Invoking International Law of State Responsibility, Pierre-Yves Condé 7. Globalizing Intellectual Property Rights: The Politics of Law and Public Health, Diana Rodriguez-Franco 8. The Transnational Meets the National: The Construction of Trade Policy Networks in Brazil, Gregory Shaffer, Michelle Ratton Sanchez Badin and Barbara Rosenberg 9. The Force of a Weak Field: Law and Lawyers in the Government of Europe, Antoine Vauchez 10.The European Court of Justice in the Emergent European Field of Power: Transnational Judicial Institutions and National Career Paths, Antonin Cohen 11. Human Rights and the Hegemony of Ideology: European Lawyers and the Cold War Battle over International Human Rights, Mikael Rask Madsen

During the past two decades, a substantial transformation of law and legal institutions in developing and transition countries has taken place. Whether prompted by the policy prescriptions of the so-called Washington consensus, the wave of  democratization, the international human rights movement or the emergence of new social movements, no area of law has been left untouched. This massive transformation is attracting the attention of legal scholars, as well as scholars from other disciplines, such as politics, economics, sociology, anthropology and history. This diversity is valuable because it promotes cross-disciplinary dialogue and cooperation. It is also important because today the study of law cannot ignore the process of globalization, which is multifaceted and thus calls for inter-disciplinary skills and perspectives. Indeed, as globalization deepens, legal institutions at the national level are influenced and shaped by rules, practices and ideas drawn, imposed or borrowed from abroad.