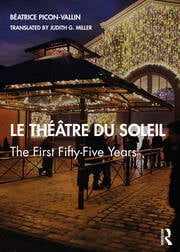 Le Théâtre du Soleil traces the company’s history from a group of young, barely trained actors, directors, and designers struggling to match their political commitment to a creative strategy, to their grappling with the concerns of migration, separation and exile in the early decades of the twenty-first century.

Béatrice Picon-Vallin recounts how, in the 55 years since its founding, the Théâtre du Soleil has established itself as one of the foremost names in modern theatre. Ariane Mnouchkine and her collaborators have developed a unique and ever-evolving style that combines a piercing richness of shape, color, and texture with precision choreography, innovative musical accompaniment, and multi-layered, metaphorical dreamscapes. This rich, storied history is illustrated by a wealth of spectacular rehearsal and production photos from the company's own archive and interviews with dozens of past and present members, including Mnouchkine herself.

Judith G. Miller’s timely translation of the first comprehensive history and analysis of a remarkable, award-winning company is a compelling read for both students and teachers of Drama and Theatre Studies.

A Word from the Author; A Word from the Translator; Opening: "For all those who have worked, or are working, with the Theatre du Soleil; Prologue: Origins; Chapter One: Destiny; Chapter Two: Collective Creation (Second Try, First Draft); Chapter Three: The Shakespeare Cycle; Chapter Four: A New Way of Writing: Creating the Great Asian Epics; Chapter Five: The House of Atreus Cycle or the Archeology of Passions; Chapter Six: The Soleil Brings in a Camera; Chapter Seven: Ten Years of Collective Creation: Between Cinema-Theatre, Documentary Theatre, and the Lyrical Epic; Transverse Perspectives: Six Thematic Illustrations; First Epilogue (2014): The Galaxy of the Soleil; Second Epilogue (2019): Returning to Asian Sources, Expanding, and Transmitting; Appendices: Chronology and Awards, Theatre Programs and Posters

Béatrice Picon-Vallin is the former director of France's research laboratory for the Performing Arts at the National Center for Scientific Research (CNRS) and professor of Theatre History at the National Conservatory of Dramatic Arts (CNSAD) in Paris, France. She is currently Director Emeritus of Research at the CNRS.