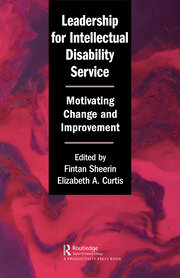 People with intellectual disability often experience challenges in their lives. These may be due to difficulties in social adaptation, but may also be related to a reality of disempowerment whereby they have little role in the decisions central to their lives or in the provision of health, educational and social services. This book argues for alternative and innovative approaches to leadership in intellectual disability service provision. It does this in the light of service scandals including Winterborne View (UK), Oswald D. Heck (USA), Áras Attracta (Ireland) and many others. This book also explores the failed leadership issues underpinning such debacles and then examines how the context for intellectual disability service provision has changed. The authors propose alternative models for service leadership that are contiguous with the changed landscape, emphasizing participatory models of leadership and ending with exemplary vignettes outlining situations where such innovative change is happening.

Section I BACKGROUND AND CONTE XT

The Role of Leadership and Motivation

Beyond Controversy in Change Management?

School of Nursing and Midwifery, University of Dublin,

Elizabeth is a member of the academic team in the School

of Nursing and Midwifery, Trinity College Dublin. She qualified

as a general nurse in London and worked in the discipline

of neurosciences in the National Health Service (NHS).

Her research interests are varied and include job satisfaction

in Nursing and Health Care: A Guide to Doing Your Higher

Degree (2008), Delegation: A Short Primer for the Practicing

(2013) and Leadership and Change for the Health Professional

(2017). Five years ago, Elizabeth set up a Leadership Network

Group to promote and expand work on leadership in nursing.

School of Nursing and Midwifery, University of Dublin,

Fintan is Associate Professor in and Head of Intellectual

Disability Nursing at the School of Nursing and Midwifery in

Trinity College Dublin. His research has largely focused on

the issues which impact on both. He leads the mental health

component of IDS-TILDA and is guiding the analysis of data

regard. Fintan is a social activist in respect of various groups

of people who find themselves on the margins of society.

He was the consultant to the Irish RTÉ television documentary,

3, which exposed abuse of people with

an intellectual disability at Áras Attracta leading to successful

prosecutions. He has published widely, spoken at many

international conferences and has contributed to a number of

books. He is a Fellow of the European Academy of Nursing