Leadership in Planning
How to Communicate Ideas and Effect Positive Change 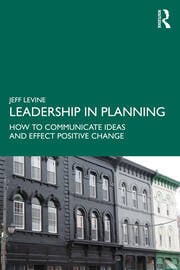 Leadership in Planning: How to Communicate Ideas and Effect Positive Change

Being an effective city planner means being an effective leader. You need to be prepared to convince people that good planning matters. Often a well-written, thoughtful and inclusive plan doesn’t result in meaningful action, because planners don’t show leadership skills. At some point, some city planners become cynical and worn down, wondering why no one listens to them but not doing the self-reflection about how that could change.

explains how to get support for planning initiatives so they don’t just fade from memory. It will guide city planners to think less about organizational charts and more about:

· Being a respected voice within your organization, both with staff and with your boss;

· Being a good communicator with people outside your organization; and

· Being able to understand how and when to push for good planning ideas to turn them into actions.

Along the way, case studies bring these concepts to the real world of municipal planning. In addition, past planning figures’ actions are explored to see what they did right and what mistakes they made.

Jeff Levine, AICP, works to make better communities. After 25 years as a planner in local government in New England, including 15 years as a planning director, he now trains the next generation of planners as a faculty member in the Department of Urban Studies & Planning at the Massachusetts Institute of Technology. He also consults with public agencies and developers on urban planning and development issues.

From 2012 to 2019, Levine was the Director of Planning & Urban Development for the City of Portland, Maine. In Portland, he led an office of 30, oversaw the development of a new Comprehensive Plan and developed a set of tools to increase the development of low-income and workforce housing. He worked to maintain a supportive and enjoyable workplace while identifying and changing aspects of their work that impeded good planning results.

Prior to working in Portland, Levine was the Director of Planning & Community Development for the Town of Brookline, Massachusetts, where he worked on several affordable housing developments, including the redevelopment of the Kennedy family church into a mixed income housing development with new public open spaces. In this office of 20, he had to balance the high expectations of a highly involved and educated populace with best practices in planning.

He serves on several nonprofit boards, including the Greater Portland Regional Transit District, GrowSmart Maine, and the Northern New England chapter of the American Planning Association.

"Jeff Levine sets the stage with his 'leading is a dance' and shows us the difference between planning leadership, planning management, and strategic planning. He explores what planning leadership means, what success looks like, and the importance of vision, risk taking and advocacy balanced with listing, inclusion and respect for communities. Jeff’s learning the lessons from past planning should be required reading for emerging planners and planning theory classes. His simple graphics help tell his story, and will probably be stolen for various PowerPoint presentations."