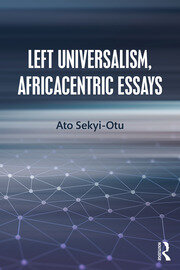 Left Universalism, Africacentric Essays presents a defense of universalism as the foundation of moral and political arguments and commitments. Consisting of five intertwined essays, the book claims that centering such arguments and commitments on a particular place, in this instance the African world, is entirely compatible with that foundational universalism. Ato Sekyi-Otu thus proposes a less conventional mode of Africacentrism, one that rejects the usual hostility to universalism as an imperialist Eurocentric hoax. Sekyi-Otu argues that universalism is an inescapable presupposition of ethical judgment in general and critique in particular, and that it is especially indispensable for radical criticism of conditions of existence in postcolonial society and for vindicating visions of social regeneration. The constituent chapters of the book are exhibits of that argument and question some fashionable conceptual oppositions and value apartheids.

This book will be of great interest to students and scholars in the fields of social and political philosophy, contemporary political theory, postcolonial studies, African philosophy and social thought.

4. Individualism in Fanon and After

Ato Sekyi-Otu is Professor Emeritus in the Department of Social Science and the Graduate Programme in Social and Political Thought at York University, Toronto, Canada. He is the author of Fanon’s Dialectic of Experience.

Excerpts from the Award.

… This is a brilliant book by a genuine scholar and intellectual. Erudite, thoughtful and productively critical, it genuinely pushes our thinking forward to a reassessment of a number of core concerns of primary interest to those who wish to imagine a different world beyond current capitalist society….

….This book deserves the Fanon award. It is of genuine international standing and simultaneously puts African philosophy back to where it belongs, namely in conversation with current high quality worldwide philosophical thought to whose concerns it offers genuinely original and innovative contributions. …

This book deserves the Fanon award for many reasons…. The text is a sober intervention in political theory from the global south—specifically, west African political thought as a point of departure into debates on ambivalences plaguing contemporary left political theory. It addresses the unfortunate tendency to treat key theoretical concepts such as universality and individuality as imports into the African context instead of part of the already critical discourses of African societies. … It is a much-needed text in contemporary political philosophy written by a giant in African political thought (as well as a giant in Fanon Studies)….

'This is a perceptive and brilliant work. Each chapter is powerful and rich and will be read over and over. We are blessed (with apologies to Armah) that Sekyi-Otu has, upon his retirement, returned to his native land – Ghana – and from that new ground, found a new and seemingly boundless energy to create a book that offers such profound insights into a set of the critical questions of our time.'—Nigel Gibson, New Frame

'Left Universalism, Africacentric Essays provides a powerful critique that Africacentrism in no way needs to reject universalism. Indeed, the danger that Ato Sekyi-Otu points to in his original book is that we reduce Afrocentrism to ethnophilosophy and, therefore, reduce its range as if it were only a local philosophical perspective. This is a well-argued and clearly written defense of universalism without in any way undermining his powerful critique of eurocentrism. It will be an important book in many diverse fields from anthropology, sociology, and political science, to key departments in the humanities such as comparative literature and philosophy.'—Drucilla Cornell, Emeritus Professor of Comparative Literature, and Gender Studies, Rutgers University

'Ato Sekyi-Otu's Left Universalism, Africacentric Essays is that rare intellectual gift-offering that one encounters between long gaps: elegant in conception, astute in its execution, and proffering some serious revisions to the entire landscape of African thought. His propositions on the relevance of a left universalism for conceptualizing an ethics of African identity are going to set the terms of the debate not just in philosophy but well beyond. It is superb.'—Ato Quayson, author of Oxford Street, Accra: City Life and the Itineraries of Transnationalism

'This book is a much-needed text in contemporary political philosophy written by a giant in African political thought. It addresses the unfortunate tendency to treat key theoretical concepts such as universality and individuality as imports into the African context instead of part of the already critical discourses of African societies. Through skillful analysis and a sober understanding of theory as addressing reality, Ato Sekyi-Otu takes on many classic tropes of postmodern political theory and avowed anti-liberalism. He brings to the fore core insights of revolutionary theories of social change in which the outrage at degradation entails antidotes of dignity, respect, and transformation of social and material conditions that impede their potential. Here, political science meets philosophy, literature, sociology, history, and more, because, as should be evident, none alone could address the gravity and scope of this problem without ignoring disciplinary shortcomings. Disciplinary nationalism falls sway to reality, as it should. I expect this work to be, as it were, a classic of contemporary political theory.'—Lewis R. Gordon, Honorary President of the Global Center for Advanced Studies and author of Existentia Africana

'In Left Universalism, Africacentric Essays Ato Sekyi-Otu, long-admired for his book Fanon’s Dialectic of Experience, presents a spirited defense of a universalism and an individualism that, he argues, escapes current critiques. Whether one agrees with him or not, there is no mistaking the commitment, the learning, and the compassion that drives the author throughout this volume. The profound philosophical meditation on his fellow Ghanaian, Ayi Kwei Armah, is a significant contribution to African philosophy in its own right.'—Robert Bernasconi, Edwin Erle Sparks Professor of Philosophy, Penn State University