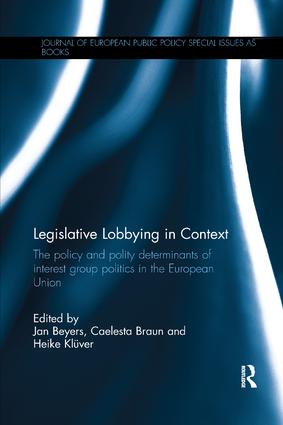 The Policy and Polity Determinants of Interest Group Politics in the European Union, 1st Edition

The lack of previous research into political interest groups and taking into account policy-specific and institutional context characteristics is largely due to research designs that have been primarily focused on a small number of policy debates, with the result that contextual characteristics were largely held constant. This book brings together articles from different modules that are part of a larger European Collaborative Research Project, INTEREURO, carried out by research teams in nine different countries under the auspices of the European Science Foundation. The main goal of the book is to analyse strategies, framing and influence processes for a set of 125 legislative proposals submitted by the European Commission, in an effort to better understand the involvement of interest organizations in the decision-making process of the EU. Contributors draw on sophisticated and innovative policy-driven samples of interest group mobilization, allowing them to account systematically for how policy-specific and institutional context factors shape mobilization, lobbying strategies and influence of interest groups on public policy debates in the EU. In this way, the book makes an important contribution to the study of interest groups in the EU and represents the breadth of positions taken in the current literature.

This book was originally published as a special issue of the Journal of European Public Policy.

1. Legislative lobbying in context: towards a conceptual framework of interest group lobbying in the European Union Heike Klüver, Caelesta Braun and Jan Beyers

4. ‘Try to see it my way!’ Frame congruence between lobbyists and European Commission officials Frida Boräng and Daniel Naurin

7. Comparing the domestic and the EU lobbying context: perceived agenda-setting influence in the multi-level system of the European Union Anne Skorkjær Binderkrantz and Anne Rasmussen

8. Information or context: what accounts for positional proximity between the European Commission and lobbyists? Patrick Bernhagen, Andreas Dür and David Marshall

Jan Beyers is Professor of Political Science at the University of Antwerp, Belgium.

is Assistant Professor in the School of Governance at Utrecht University, The Netherlands.

is Professor of Comparative Politics at the University of Hamburg, Germany.