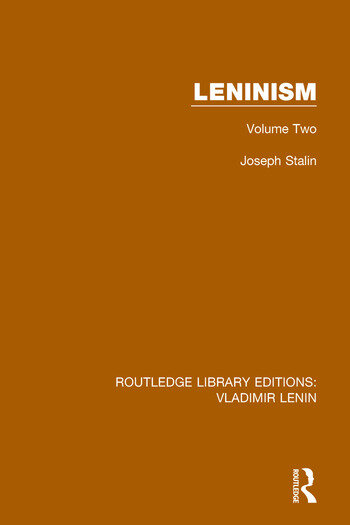 Translated from the Russian in 1933, this and the first volume of the same title give an invaluable picture of what the Russian leader Joseph Stalin understood by Leninism. Building on the pamphlet Foundations of Leninism, (which forms the first part of this book) the work presents a unified and complete work on the problems of Leninism and socialist construction as they were manifested in the 1920s, as well as discussion of the October Revolution and the relationship of the USSR and the West in the years following the First World War.

1. Regarding the Workers' and Peasants' Government 2. The Three Basic Slogans of the Party on the Peasant Question 3. The Slogan of the Dictatorship of the Proletariat and the Peasantry in the Period of Preparation For the October Revolution 4. Interview With The First American Labour Delegation in Russia (September 9, 1927) 5. Interview With Foreign Workers' Delegations on November 5, 1927 6. On the Grain Front 7. Lenin on the Alliance with the Middle Peasants 8. The July Plenum of the Central Committee of the C.P.S.U 9. The Right Danger of the C.P.S.U 10. The Industrialisation of the Country and the Right Deviation in the C.P.S.U 11. The Right Deviation in the Communist Party of the Soviet Union 12. A Year of Great Change 13. Questions of Agrarian Policy in the Soviet Union 14. On the Policy of Liquidating the Kulaks as a Class 15. Dizzy with Success 16. Reply to Comrades on the Collective Farms 17. Political Report of the Central Committee to the Sixteenth Congress of the Communist Part of the Soviet Union 18. The Tasks of Business Managers 19. New Conditions, New Tasks 20. Some Questions Regarding the History of Bolshevism