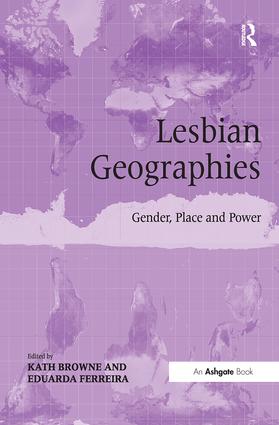 It has long been recognised that the spatialisation of sexual lives is always gendered. Sexism and male dominance are a pervasive reality and lesbian issues are rarely afforded the same prominence as gay issues. Thus, lesbian geographies continue to be a salient axis of difference, challenging the conflation of lesbians and gay men, as well as the trope that homonormativity affects lesbians and gay men in the same ways. This volume explores lesbian geographies in diverse geographical, social and cultural contexts and presents new approaches, using English as a working language but not as a cultural framework. Going beyond the dominant trace of Anglo-American perspectives of research in sexualities, this book presents research in a wide range of countries including Australia, Argentina, Israel, Canada, USA, Russia, Poland, Spain, Hungary and Mexico.

’Lesbian Geographies is a thought-provoking book. Not only for the complexity and diversity of the lesbian spatial reality presented in its pages, but above all by the challenge to the way we have produced the geographies of sexualities. Besides enriching and broadening intellectual horizons, this book offers a way to build less arrogant and more hopeful scientific paths.’ Joseli Maria Silva, State University of Ponta Grossa, Brazil ’Where are the lesbians? Lesbian Geographies, a wide-ranging and insightful collection, teaches us that a meaningful answer to this question requires not adding lesbians to geography but rebuilding geography by centering on lesbian experiences in all their diversity. From housework to the organising of lesbian festivals, lesbian lives are shaped by and reshape worlds. A necessary and important collection.’ Sara Ahmed, Goldsmiths, University of London, UK ’For those who think that issues such as the lack of lesbian and queer socialising spaces are neither important nor deserve much theoretical and empirical analysis from the Social Sciences, this book is a must read. Departing from the intersections between queer and feminist geographies, and calling into question the Anglo-American hegemonies in these debates, it includes a complex analysis of resistant spaces and places, economic and social differences, power relations and communities, among many other important topics. Bravo!’ Gracia Trujillo, University of Castille - La Mancha, Spain

Kath Browne is Professor in Human Geography at the University of Brighton. She works on sexualities, gender and geographies. Eduarda Ferreira is a researcher at the CICS.NOVA - Interdisciplinary Centre of Social Sciences, Universidade Nova de Lisboa, Portugal. She has published and presented on gender, sexualities, lesbian studies, equality policies and participatory geospatial web.