Liberty and Union
A Constitutional History of the United States, concise edition 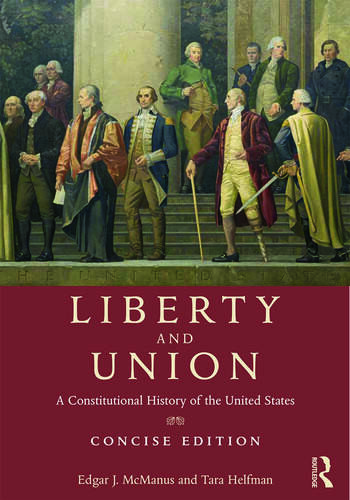 Liberty and Union: A Constitutional History of the United States, concise edition

This, the concise edition of Liberty and Union, is an abridged constitutional history of the United States, designed for short single-semester courses, comprising the key topics from Volumes 1 and 2.

Written in a clear and engaging narrative style, it successfully unites thorough chronological coverage with a thematic approach, offering critical analysis of core constitutional history topics, set in the political, social, and economic context that made them constitutional issues in the first place. Combining a thoughtful and balanced narrative with an authoritative stance on key issues, the authors deliberately explain the past in the light of the past, without imposing upon it the standards of later generations.

Authored by two experienced professors in the field, this concise edition presents seminal topics while retaining the narrative flow of the two full original volumes. An accessible alternative to dense scholarly works, this textbook avoids unnecessary technical jargon, defines legal terms and historical personalities where appropriate, and makes explicit connections between constitutional themes and historical events. For students in a short undergraduate or postgraduate constitutional history course, or anyone with a general interest in constitutional developments, this book will be essential reading.

"Liberty and Union is a superb primer on the English origins of American jurisprudence that highlights the most significant aspects of the constitutional history of the United States. Crisply written with a dash of wit and humor, the authors excel at explaining essential legal concepts and differing historical interpretations with clarity and precision. In this splendid overview and comprehensive analysis, they persuasively make the case for the Constitution’s centrality to American culture, politics, and nationhood."

"Although history is often characterized as 'argument without end,' McManus and Helfman’s comprehensive yet accessible conclusion to their two-part constitutional history of the United States may well come to be seen as the definitive study of the topic for generations. Clear, concise, lucid, and compelling, McManus and Helfman not only explain how larger societal trends were influencing the evolution of everyday Americans’ understanding of constitutionalism and our constitutional values, but they also introduce us to the key personalities and critical legal concepts that both enabled and reflected the changes that have come to define the last century of American constitutional history. Anyone from the most amateur student of American history to the most seasoned constitutional lawyer has much to learn from this delightful denouement to Liberty and Union."

Reviews of the concise edition:

"In their new concise edition of Liberty and Union, Edgar J. McManus and Tara Helfman have done an admirable job of condensing what is a complicated and nuanced area of history into a 'short' textbook. [I]n many ways, this edition reads as a more fluid version of the previously published two-volume set. One of the strengths of this volume is the accompanying online material, including not only case law but also statutes, speeches, interviews, videos, and so on. ... By the end of Liberty and Union, the reader will have a good understanding of constitutional change and continuity and the ebbs and flows of American constitutional history."

"Liberty and Union is designed for students in short, single-semester courses. But it is also a valuable resource for anyone interested in the origins of the American experiment, its development, and its prospect. And for Americans, in particular, it teaches something transcendently important about our politics, which is that we have (as the authors put it) 'no royal family, state religion, or common ethnicity cementing [our] links with one another. We have only the Constitution and the way of life it guarantees in creating the commonality of nationhood. It is what holds us together and legitimizes our political aspirations.'”