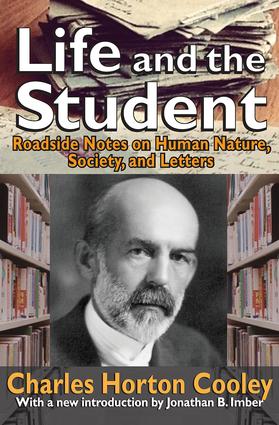 Life and the Student

Life and the Student (1927), with a new introduction by Jonathan B. Imber, is a compilation of reflections, commentaries, and letters from other scholars that Charles Horton Cooley, accumulated throughout his life. The book includes personal passages on various topics within the realms of reading and writing, thinking, art, science, sociology, academia, religion, and human nature.

There is no formal structure to the book, except the literary sense that organizes these thoughts and observations about life. It is impossible to categorize these widely ranging commentaries. They include discussions of the automobile, the impressionable nature of young people, the claim that the question of racial superiority is still unresolved, his belief that eugenists are inconsistent in their views, and more.

Cooley's work sought to emphasize the connection between society and the individual. He believed that the two could only be understood in relationship to each other. While researching the effects of social responses and social participation, he created the concept of the "looking-glass self," which is the theory that a person's sense of self grows out of interpersonal interactions and the perceptions of others. Cooley also showed that social life and the relationship between groups and communities stems from mental phenomena.

INTRODUCTION: THE VOCATION OF CHARLES HORTON COOLEY
by Jonathan B. Imber

Building — The Glamour of Art — The Artist's Public — Heritage — Art
and Conduct — An Art of Society? — Art and Science — The Fallibility
of Scientific Groups — Skirmishes on the Border — Pseudo-Science
— Perception — Diagrams and Statistics — Traits of Sociology — Two
Ways of Organizing Life — The Organization of Freedom — "Heredity
or Environment."

A Soft Job — An Art? — The Day's Work — The Eloquent Man — Formalism
— Heritage and Spontaneity — The Passing Current — The
Chair — American Universities — The Campus — Scholars and Administrators
— Genius on the Faculty — Academic Freedom — The
Academic Outlook — Outing

Is Human Nature Selfish — Self-Expression — The Looking-Glass Self
— Possessions — The Material "I" — On a Remark of Dr. Holmes — On
Certain Sentiments — The "Gregarious Instinct " — Plans — Anticipation
— The End of the World — The Transitive Attitude — Posthumous
Fame — Might and Right — Prudence — Worry — Distraction — Mental
Management — Compensation

Faith — The Mind of the Soldier — The Lot of the Individual — As to
the Shortness of Life — Evolution — Expansion — Solidarity — Perplexity
— The Incredibility of Institutions — Past, Present and Future —
Ideas about God — God and Oneself — Seeking God — Another Life?
— Varieties of Idealism — Can Christianity Survive? — The Golden
Rule — Group Sins — Social Religion — Christianity and Class — The
Church — Salvation