Lineament: Material, Representation and the Physical Figure in Architectural Production 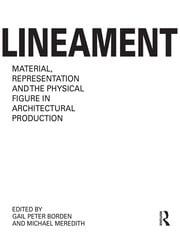 Lineament: Material, Representation and the Physical Figure in Architectural Production

This comprehensive catalogue of contemporary work examines the renewed investment in the relationship between representation, materiality, and architecture. It assembles a range of diverse voices across various institutions, practices, generations, and geographies, through specific case studies that collectively present a broader theoretical intention.

Gail Peter Borden is Director of Graduate Studies and a tenured professor at the Gerald D. Hines College of Architecture and Design at the University of Houston, USA. As principal of Borden Partnership since 2002, his design work has won numerous recognitions including: the Architectural League Prize; the AIA Young Architect Award; Building Design and Construction magazine’s "40 Under 40" award; and numerous AIA, ACSA, and RADA awards. Borden received artist-in-residence awards from the Chinati Foundation in Marfa, Texas; the Atlantic Center for the Arts; the Borchard Fellowship; and the MacDowell Colony. His teaching has been recognized with an ACSA New Faculty Teaching Award as one of the top emerging architecture faculty. He was named the youngest Fellow of the AIA in the history of California and has received university awards for artistic expression, teaching and mentoring.

As a designer, artist, theoretician, and practitioner, Professor Borden’s research and practice focuses on the role of materiality and architecture in contemporary culture.

Michael Meredith is a principal and co-founder of MOS, as well as an Associate Professor at Princeton University School of Architecture, USA. Meredith's writings on architecture, architectural pedagogy, and contemporary architectural production and representation have appeared in Artforum, Log, Perspecta, Praxis, Domus, and Harvard Design Magazine. Editorial contributions include the architectural journals and publications Log (Spring/Summer 2011), MATTER (2011), and an introduction to Praxis 11 (February 2011). Meredith previously taught at Harvard University's Graduate School of Design, at the University of Michigan, where he was awarded the Muschenheim Fellowship, and at the University of Toronto.

"Lineament traces out a shared set of concerns among a generation of practitioners who are producing compelling new work at the same time as they contribute to ongoing academic debates. The editors have assembled a diverse group capable of moving freely between analog and digital production, and equally comfortable with discursive and material practices. This is a body of work in which projects do not simply illustrate theoretical concepts articulated elsewhere, but instead demonstrate an intricate interplay between ideas and things." - Stan Allen, Architect and George Dutton Professor of Architecture, Princeton University, USA