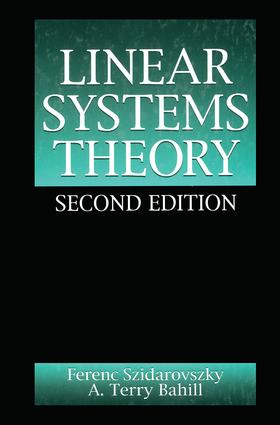 The book focuses mainly on applications in electrical engineering, but it provides examples for most branches of engineering, economics, and social sciences.

What's New in the Second Edition?

Although more mainstream than its predecessor, this revision maintains the rigorous mathematical approach of the first edition, providing fast, efficient development of the material.

Linear Systems Theory enables its reader to develop his or her capabilities for modeling dynamic phenomena, examining their properties, and applying them to real-life situations.

"Szidarovszky and Bahill differentiate their work from others on systems theory as more vigorously mathematical, more broadly theoretical, and based on computer-oriented rather than graphical methods."

The Concept of Dynamic Systems

The Elements of the Lyapunov Stability Theory