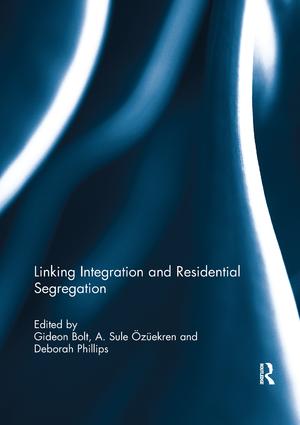 Policy-makers tend to view the residential segregation of minority ethnic groups in a negative light as it is seen as an obstacle to their integration. In the literature on neighbourhood effects, the residential concentration of minorities is seen as a major impediment to their social mobility and acculturation, while the literature on residential segregation emphasises the opposite causal direction, by focusing on the effect of integration on levels of (de-)segregation.

This volume, however, indicates that the link between integration and segregation is much less straightforward than is often depicted in academic literature and policy discourses. Based on research in a wide variety of western countries, it can be concluded that the process of assimilation into the housing market is highly complex and differs between and within ethnic groups. The integration pathway not only depends on the characteristics of migrants themselves, but also on the reactions of the institutions and the population of the receiving society. Linking Integration and Residential Segregation exposes the link between integration and segregation as a two-way relationship involving the minority ethnic groups and the host society, highlighting the importance of historical and geographical context for social and spatial outcomes.

This book was originally published as a special issue of the Journal of Ethnic and Migration Studies.

Gideon Bolt is Assistant Professor of Urban Geography, Methods and Techniques in the Faculty of Geosciences at Utrecht University, The Netherlands. His research focuses on urban policy, residential segregation and neighbourhood choice. Bolt is an editor of the Journal of Housing and the Built Environment and Tijdschrift voor de Volkshuisvesting [Journal of the Housing Sector].

A. Sule Özüekren is a Professor in the Faculty of Architecture at Istanbul Technical University, Turkey. Her research focuses on the housing and residential segregation of minority ethnic groups. Ozuekren is one of the co-ordinators of the ENHR’s working group on ‘minority ethnic groups and housing’. She is on the Advisory Board of the International Journal of Urban Policy.

Deborah Phillips is a Reader in Ethnic and Racial Studies in the School of Geography at the University of Leeds, UK, and also holds a lectureship at Jesus College Oxford. She has published widely on aspects of race, ethnicity and cultural difference, including discourses on ethnic segregation and integration, community cohesion, housing welfare and debates surrounding citizenship and belonging.