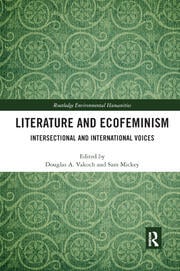 Bringing together ecofeminism and ecological literary criticism (ecocriticism), this book presents diverse ways of understanding and responding to the tangled relationships between the personal, social, and environmental dimensions of human experience and expression.

explores the intersections of sexuality, gender, embodiment, and the natural world articulated in literary works from Shakespeare through to contemporary literature. Bringing together essays from a global group of contributors, this volume draws on American literature, as well as Spanish, South African, Taiwanese, and Indian literature, in order to further the dialogue between ecofeminism and ecocriticism and demonstrate the ongoing relevance of ecofeminism for facilitating critical readings of literature. In doing so, the book opens up multiple directions for ecofeminist ideas and practices, as well as new possibilities for interpreting literature.

This comprehensive volume will be of great interest to students and scholars of ecocriticism, ecofeminism, literature, gender studies, and the environmental humanities.

Douglas A. Vakoch is President of METI (Messaging Extraterrestrial Intelligence), a nonprofit dedicated to transmitting intentional signals to nearby stars, as well as fostering sustainability of human civilization on multigenerational timescales—a prerequisite for a project that could take centuries or millennia to succeed.

"Ever since its origins, ecofeminism has advocated for the dismantling of all the interweaved forms of oppression that encapsulate women, nonhuman animals, marginal humans, and whatever subject has been marked as "other" by dominants systems of power, including the earth. Merging with literary studies, these emancipatory stances have found their narratives and new critical landscapes. With its rich plurality of angles and visions, Literature and Ecofeminism: Intersectional and International Voices continues to enrich this seminal conversation, demonstrating the key role of feminist ecocriticism in shaping creative epistemologies of liberation that are essential to the imagination of our time."