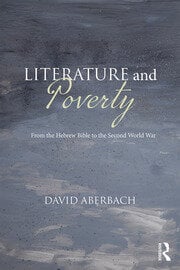 Literature and Poverty: From the Hebrew Bible to the Second World War

offers an engaging overview of changes in literary perceptions of poverty and the poor.  Part I of the book, from the Hebrew Bible to the French Revolution, provides essential background information. It introduces the Scriptural ideal of the ‘holy poor’ and the process by which biblical love of the poor came to be contested and undermined in European legislation and public opinion as capitalism grew and the state took over from the Church; Part II, from the French Revolution to World War II, shows how post-1789 problems of industrialization, population growth, war, and urbanization came to dominate much European literature, as poverty and the poor became central concerns of major writers such as Dickens, Dostoyevsky, and Hugo.

David Aberbach uses literature – from the Bible, through Shakespeare, Wordsworth, Zola, Pushkin, and Orwell – to show how poverty changed from being an endemic and unavoidable fact of life, to a challenge for equality that might be attainable through a moral and rational society. As a literary and social history of poverty, this book argues for the vital importance of literature and the arts in understanding current problems in International Development.

Introduction: Biblical Ideals to Secular Realities  Part 1: The ‘Holy Poor’ and its Desecrations: From the Hebrew Bible to the French Revolution  1. The Bible and the Poor: law and literature  2. The Medieval Transformation: the Unholy Poor in Literature and Poor Law  3. Sixteenth-century English nationalism: Poor Law, Scripture, and Shakespeare  4. From Shakespeare to Wordsworth: the rediscovery of biblical love for the poor  Part 2: Poverty in the West and the Failure of Ideologies, 1789–1939  5. Industry, Revolution, and the Poor  6. Germinal: Peasants and Literature in England, Russia, and France  7. Jews in Eastern Europe 1861–1917: degradation and recovery  8. Hunger-Artists: from Pushkin to Orwell  9. Poverty, Literature, and the Environment  10. The End of Extreme Poverty in the West: Interwar Italy and America  Appendix: The ‘Holy Poor’ in the Literature of Developing Countries, 1945–