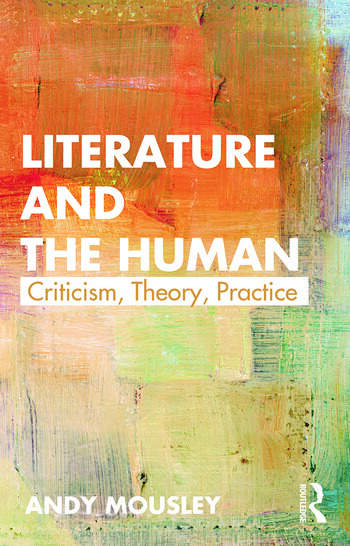 Why does literature matter? What is its human value? Historical approaches to literature have for several decades prevailed over the idea that literary works can deepen our understanding of fundamental questions of existence. This book re-affirms literature's existential value by developing a new critical vocabulary for thinking about literature's human meaningfulness. It puts this vocabulary into practice through close reading of a wide range of texts, from The Second Wakefield Shepherds’ Play to Mohsin Hamid’s The Reluctant Fundamentalist. Individual chapters discuss:

The question at the heart of the volume, of why literature matters, makes this book relevant to all students and professors of literature.

Andy Mousley is a Reader at De Montfort University. He is the author of Re-Humanising Shakespeare (2007), co-author of Critical Humanisms (2003), and editor of Towards a New Literary Humanism (2011). He has published widely on humanism and posthumanism, including articles in Textual Practice and Biography.

"Andy Mousley’s study of literature and the human is attractively and modestly written, but it packs a real punch – it is no less than an attempt, against the orthodoxies of the last thirty years, to assert the necessity of recognising human universals in our accounts of literature. In a series of brilliant and persuasive analyses, he succeeds in providing a rich vocabulary for mediating between these universals and the dense particularities of literary texts. Mousley’s striking juxtapositions, of The Second Wakefield Shepherds’ Play with Endgame, of White Noise with ‘Tintern Abbey’, suggest the range and ambition of this engaging and quietly radical book." Simon Dentith, Professor of English Literature, University of Reading, UK

"What sort of conversation does criticism have with literature? Or with the readers of literature? In this subtle and engaging book, Andy Mousley makes a persuasive case through a sequence of adept readings for a conversation that is grounded in a nuanced and plural conception of the human. In doing so, he illuminates simultaneously his chosen texts and the communal processes of reading."  Ben Knights, National Teaching Fellow, Emeritus Professor of English and Cultural Studies, Teesside University UK and Visiting Professor, Institute of Education, University of London, UK

"In a time of image saturation when habits of reflective reading are under threat, it is more important than ever to articulate the kinds of things we may learn from dense literary texts. In his generous, wide-ranging, and insightful new book, Andy Mousley offers just such an articulation, gracefully blending theory of reading and writing with close attentions to authors from Donne and Shakespeare to Beckett, DeLillo, and Carol Ann Duffy. What emerges is a thought of the first importance: that we are animals who live within a contested universal, not finally knowing our essential nature, but ever re-approaching it through writing and reading." Richard Eldridge, Charles and Harriett Cox McDowell, Professor of Philosophy, Swarthmore College, USA

"Boldly argued, subtly explicated through a range of poems, plays and novels, Andy Mousley's fresh and stimulating book returns the activity of reading imaginative literature to readers in their own search for 'human meaningfulness' and emotional fulfilment." Professor R. S. White, Australian Research Council Centre of Excellence in the History of Emotions, AUS