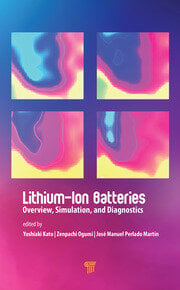 Among various types of secondary batteries, lithium-ion batteries are most widely used because of their high energy density, small memory effect, and low self-discharge rate. This book introduces lithium-ion batteries, with an emphasis on their overview, roadmaps, and simulations. It also provides extensive descriptions of ion beam analysis and prospects for in situ diagnostics of lithium-ion batteries. The chapters are written by specialists in cutting-edge research on lithium-ion batteries and related subjects. The book will be a great reference for advanced undergraduate- and graduate-level students, researchers, and engineers in electrochemistry, nanotechnology, and diagnostic methods and instruments.

Yoshiaki Kato is professor emeritus at Osaka University, Japan. Previously, he was president of the Graduate School for the Creation of New Photonics Industries, Japan, and president of the Laser Society of Japan. Prof. Kato has led many domestic and international programs on lasers and particle beams, including the JST-MINECO Strategic Japanese–Spanish Cooperative Program on Characterization of Advanced Electrode Materials by Means of Ion Beam Analysis Technique for Next Generation Li-Ion Batteries with Prof. M. Perlado (a coeditor of this book).

was professor of electrochemistry at the Graduate School of Engineering, Kyoto University, Japan. He was also president of the Electrochemical Society of Japan, the Solid State Ionics Society of Japan, and the International Battery Association. In addition, he led the R&D Initiative for Scientific Innovation of New Generation Battery (RISING) project.

is full professor and chair of nuclear physics at the Universidad Politecnica Madrid (UPM), Spain, and director of the Instituto Fusion Nuclear, UPM. He is the Spanish representative in the EURATOM Program Committee for Fission and Fusion, member of the ESS Technical Advisory Committee, and Spanish principal investigator in the ESFRI HiPER Project for Inertial Fusion Energy. He was an invited scientist at the Institute of Laser Engineering, Osaka University, Japan; the Lawrence Livermore National Laboratory (LLNL), USA; the Lebedev Physical Institute, Russian Academy of Sciences, Russia; and CERN, Switzerland. Prof. M. Perlado is the author of 4 books on energy, editor of several other books, and author of about 300 Journal Citation Reports (JCR) publications.