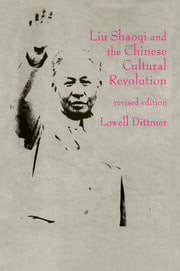 By addressing the issues that decimated China's monolithic elite in the late 1960s, this text illuminates not only the life and fate of Liu Shaoqi, but also the policy-making process of a revolutionary state facing the diverting exigencies of economic modernization and political development.

After over a decade of administrative and economic reform in mainland China, the center has become increasingly remote and less important for many localities. In many ways, the mobilization capacity of the central government has been weakened. Central government policies are often ignored and local officials are often more interested in personal projects than in centrally directed economic plans. In this study of local government and politics in China, the author explores when and why local government officials comply with policy directives from above. Drawing on interviews with government officials in various municipalities and a review of county records and other government documents, he provides the first in-depth look at policy implementation at the county and township levels in the PRC. The book examines the impact of the Chinese cadre system on the behavior of local officials, local party and government structure, relationships among various levels of Chinese local government, policy supervision mechanisms at local levels, village governance of China, and more.