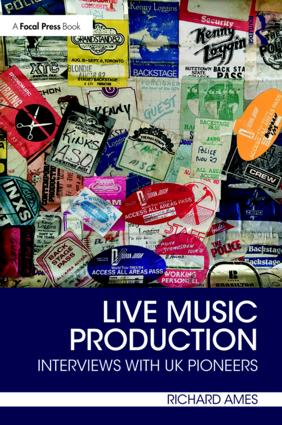 This book presents the days of live music production in the UK spanning the late '60s to the mid-'80s, when rock music was enjoying a meteoric rise in popularity.

The author, Richard Ames, will take you on a true behind-the-scenes journey of discovery. You’ll learn who the people were, where they came from and how they went on to pioneer the first companies that would become the lifeblood of a unique industry. The interviews contained in this book record and present the raw stories of a few of the original innovators who set the stage for their performers but also for the hundreds of technicians who would tour the world following in their footsteps. The pioneers presented in these interviews share with the reader countless candid anecdotes that convey how their curious enthusiasm, energy, dedication, and general can-do attitude was the driving force behind the creation of the many companies we know of as common place today. The book presents interviews that span varied aspects of live music production including lighting, sound, rigging, staging, trucking, bussing and catering. Live Music Production captures a piece of social history that promises to inform, entertain and delight.

"An easy read and a welcome introduction to the history of rock and roll touring." - Steve Moles

Richard Ames has been a tour manager and tour director in the UK live music industry since the early 1970s, a profession in which he is still involved to this day. He considers himself incredibly lucky and privileged throughout his life to have been asked to help some great bands and their crews travel around the world and entertain their fans.