Living Psychoanalysis
From theory to experience 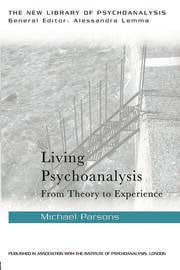 Living Psychoanalysis: From theory to experience

Living Psychoanalysis: From Theory to Experience represents a decade of work from one of today's leading psychoanalysts. Michael Parsons brings to life clinical psychoanalysis and its theoretical foundations, offering new developments in analytic theory and vivid examples of work in the consulting room. The book also explores connections between psychoanalysis, art and literature, showing how psychoanalytic insights can enrich our lives far beyond the clinical situation.

– asks what it means to be fully and creatively alive, and introduces the concept of avant-coup

Sexuality, Narcissism and the Oedipus complex

– explores links between psychoanalytic listening and the way artists look at the world, and introduces the concept of the internal analytic setting

The Independent tradition in British psychoanalysis

– considers the theoretical foundations of Independent clinical technique, and discusses from various perspectives the role of training in developing the identity of analysts and analytic therapists

With fresh theoretical concepts and a focus on specific aspects of clinical practice, Living Psychoanalysis: From Theory to Experience will be a valuable resource for analysts, therapists and professionals who wish to extend their vision of psychoanalysis. It will also be of great interest to general readers concerned to deepen their understanding of the links between culture and the mind.

Introduction. Part 1: Between Death and the Primal Scene.Keeping Death Alive. Why Did Orpheus Look Back? Après-Coup, Avant-Coup. Appendix: More About Memory. In Defence of the Uncanny. Part 2: Concepts on the Move. Sexuality and Perversion: Discovering What Freud Discovered. Oedipal Disidentification: Au Nom Du Fils, Au Nom De La Fille.Narcissism as Prison, Narcissism as Springboard: A Reading of Sophocles’ Ajax. Part 3: The Activity of Listening. Listening Out, Listening In, Looking Out, Looking In. The Analyst’s Countertransference to the Psychoanalytic Process .Raiding the Inarticulate: Internal Setting, Beyond Countertransference. Part 4: Clinical Practice Taking Shape. What Does Interpretation Put Into Words? An Independent Theory of Clinical Technique. Forming an Identity: Reflections on Psychoanalytic Training.

Michael Parsons is a Training Analyst of the British Psychoanalytical Society and a member of the French Psychoanalytic Association. With more than thirty years of experience in his field, he teaches and lectures all over the world. He is the author of The Dove that Returns, The Dove that Vanishes: Paradox and Creativity in Psychoanalysis (Routledge, 2000).

"BBC Radio 4 has a book programme called ‘A Good Read’. Living Psychoanalysis is a good read. Michael Parsons has an ear for the English language. He writes about difﬁcult concepts, for example, Après-coup, Remèmoration, Avant-coup, with clarity. A clarity that enables the reader to think about the concepts them-selves rather than ﬁrst ‘hunt for the verb’, an activity which happens too often in analytic writing." – Dorothy Girouard, British Psychotherapy Foundation for the British Journal of Psychotherapy

"Michael Parsons’ Living Psychoanalysis ranges widely, from theories about technique to a consideration of concepts including narcissism, sexuality and perversion and oedipal disidentification, to regression, to psychic growth and psychic fixedness, to listening and countertransference, and far more. What is most notable about the book, however, is not so much its breadth as its depth. Rooted in the tradition of Independent psychoanalysis, it offers a compelling view of what it can mean to be creatively alive." –  Renee Darniger, The International Journal of Psychoanalysis

"The language of the Independent tradition in British psychoanalysis, carried by Donald Winnicott, Marion Milner, Nina Coltart and many others, has always been non-dogmatic, lyrically tentative, close to the heart of the life of being an analyst. Like a deep, familiar drum the voice of Michael Parsons speaks from within that tradition. He ranges widely and deeply from clinical issues to theoretical axioms, to works of art and literature, and further afield, always remaining close to experience. Independent thinking lives on in this profound and creative work." – Christopher Bollas, psychoanalyst.

"The psychoanalyst Donald Winnicott noticed that a regular outcome of psychoanalytic treatment was an enhanced sense of being alive. And he came to think this ought to be an aim of psychoanalysis: to help analsands recover their own lost sense of vibrancy. In Living Psychoanalysis, Michael Parsons takes up this idea with nuance, sensitivity and rich clinical detail. He shows us how crucial it is for human life itself that we be able to celebrate life via our capacity for feeling alive." - Jonathan Lear, The University of Chicago.