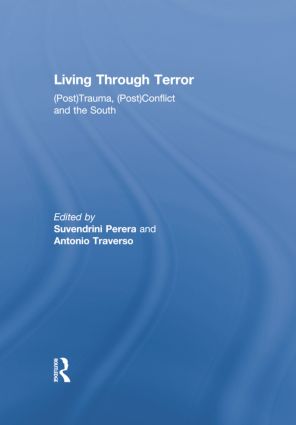 In the era of war on terror, the term terror has tended to be applied to its sudden eruptions in the metropolises of the global north. This volume directs its attention to terror’s manifestations in other locations and lives. The title Living Through Terror refers both to the pervasiveness of terror in societies where extreme violence and war constitute the everyday processes of life as well as to the experience of surviving terror and living into the future.

The contributions consider terror’s effects in those ignored and silenced locations where terror is either naturalised (the Philippines, South Africa, Timor Leste, Sri Lanka) or made invisible (the neo-liberal democracies of Australia and Italy).

The stories of ruined places, displaced bodies and identities shattered and remade that emerge from these pages bring into view the socio-political systems, cultural geographies and regimes of territoriality through which terror is engendered and naturalised, and the institutions and imaginaries that continue to underpin them.

The essays, literary writings and images collected here attend, in their different ways, to subjects living in and with terror as an element incorporated in their everyday, and to the processes by which terror exercises itself in their lives, whether it is perpetrated by state or non-state actors. Simultaneously, the contributions attest to the tactics subjects deploy to confront and negotiate conditions of terror, their attempts to live with and through terror and, ultimately, their strategies to recover through the everyday and the ordinary the seeds of life and hope.

3.After the death of the island: Fiji May 1987 Mohit Prasad

7.Tales from the South: a visual essay Antonio Traverso

Suvendrini Perera is Associate Professor of Cultural Studies at Curtin University, Australia. Her most recent book is Australia and the Insular Imagination (NY: Palgrave 2009). She is the editor of Our Patch: Australian Post 2001 (Network 2008).