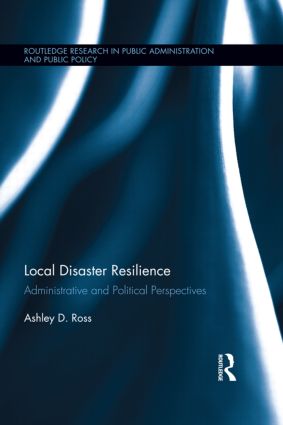 Since 2000, the Gulf Coast states – Texas, Louisiana, Mississippi, Alabama, and Florida – have experienced a series of hurricanes, multiple floods and severe storms, and one oil spill. These disasters have not only been numerous but also devastating. Response to and recovery from these unprecedented disasters has been fraught with missteps in management. In efforts to avoid similar failures in the future, government agencies and policy practitioners have looked to recast emergency management, and community resilience has emerged as a way for to better prevent, manage, and recover from these disasters. How is disaster resilience perceived by local government officials and translated into their disaster response and recovery efforts?

not only fills a critical gap in the literature by applying existing theories and models to a region that has experienced the worst disasters the United States has faced in the past decade, but it can also be used as a tool to advance our knowledge of disasters in an interdisciplinary manner.

"Ashley D. Ross has done those of us who think resilience has meaning in disaster recovery a great favor. This book establishes the definition of resilience in a nuance and important way. No longer are we left with a rudimentary discussion of resilience. Ross has attached methodological heft to the meaning of resilience. Going forward, we can discern just what can be termed a resilient response to disaster and what is not."

"Ashley D. Ross is a rising star among the next generation of scholars who study natural hazards and disasters. Her book represents an important contribution to the field, effectively filling a niche in how emergency managers and elected officials perceive their own community’s disaster resilience relative to an empirical assessment of local resilience in these same jurisdictions. Her findings are particularly relevant to our emerging understanding of this often misunderstood concept, while providing key insights into how we can improve our national policy in order to better assist local communities achieve this still elusive aim."

Ashley D. Ross is an Assistant Professor of Political Science at Sam Houston State University. Her research focuses on comparative public policy with an emphasis on local governments. In addition to this work on local disaster resilience, her research has examined decentralization in Latin America, education policy in the United States, and environmental policy among municipalities in Costa Rica.