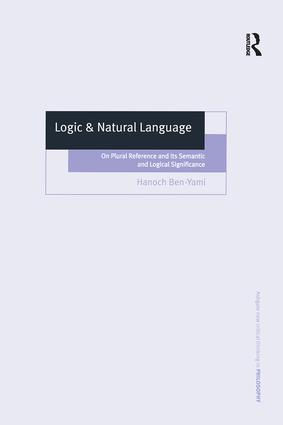 On Plural Reference and Its Semantic and Logical Significance, 1st Edition

'I have been reading this book with great admiration and also with great sympathy. I wholeheartedly agree that the syntax and semantics of natural language can be perfectly well understood, and even sytematised, without any recourse to the predicate calculus - which, indeed, is a distortion of the whole thing. I much enjoyed what Ben-Yami said about identity and relished his bold and forceful conclusions. Ben-Yami has done a most valuable and important service to philosophy in general and to the philosophy of language in particular. P. F. Strawson, University College, Oxford 'In this bold and highly original book, Dr Ben-Yami examines the logico-semantic features of plural reference in natural languages, and demonstrates the inadequacy of the Frege/Russell treatment of this semantic function in the predicate calculus. From this apparently minor flaw, he shows in detail how the pretensions of the calculus to represent the semantics of natural language progressively unravel, and offers in its place a novel deductive system for natural language of comparable power. The argument is a tour de force of dispassionate logico-linguistic analysis, written with luminous clarity. It will force a thoroughgoing reconsideration of the status and value of the predicate calculus.' P.M.S. Hacker, Fellow of St John's College, Oxford

The Ashgate New Critical Thinking in Philosophy series brings high quality research monograph publishing into focus for authors, the international library market, and student, academic and research readers. Headed by an international editorial advisory board of acclaimed scholars from across the philosophical spectrum, this monograph series presents cutting-edge research from established as well as exciting new authors in the field. Spanning the breadth of philosophy and related disciplinary and interdisciplinary perspectives Ashgate New Critical Thinking in Philosophy takes contemporary philosophical research into new directions and debate.