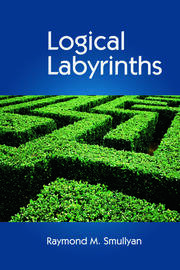 This book features a unique approach to the teaching of mathematical logic by putting it in the context of the puzzles and paradoxes of common language and rational thought. It serves as a bridge from the author’s puzzle books to his technical writing in the fascinating field of mathematical logic. Using the logic of lying and truth-telling, the author introduces the readers to informal reasoning preparing them for the formal study of symbolic logic, from propositional logic to first-order logic, a subject that has many important applications to philosophy, mathematics, and computer science. The book includes a journey through the amazing labyrinths of infinity, which have stirred the imagination of mankind as much, if not more, than any other subject.

In addition to being one of the most important mathematical logicians of our time, Raymond Smullyan is also a master inventor and purveyor of logic puzzles... Much of Smullyan's technical work consists of ingenious ways to generalize features of formal systems and crucial results in mathematical logic. That is what is highlighted in this book. Indeed, to motivate the presentation of the logic, he presents a clean and insightful generalization of many of the logic puzzles themselves. ... Given Smullyan's vitality, we can all hope for the sequel.
—Stewart Shapiro, Mathematical Reviews, October 2009

If mathematics educators wish to narrow the gap between expert and novice, they must understand the factors in the teaching and learning of proof, design rich explorations, and establish an environment in which these explorations are possible. The author accomplishes this admirably.
—Premalatha Junius, Mathematics Teacher, November 2009

Smullyan ... has earned fame for writing a small shelf of puzzle books. ... [Here] he provides a textbook on first-order logic, suitable for classroom use but animated with the lively imagination that makes his puzzle books a delight.
—D.V. Feldman, CHOICE, February 2010