Logics of Critical Explanation in Social and Political Theory 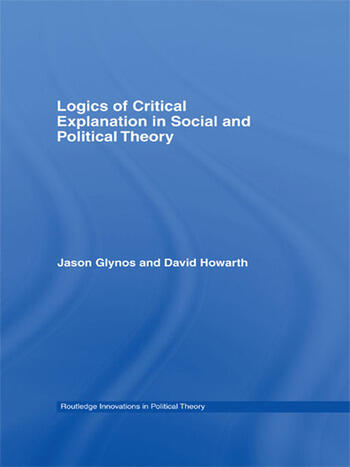 Logics of Critical Explanation in Social and Political Theory

The Social Science Wars have precipitated a renewed interest in the character, purpose and methods of social science. Positivists and naturalists are criticized by interpretivists and critical theorists, while quantitative researchers are challenged by those who favour qualitative and ethnographic techniques. In turn, mainstream social scientists have responded with a vigorous defence and restatement of their commitments.

Logics of Critical Explanation in Social and Political Theory proposes a novel approach to practising social and political analysis based on the role of logics. The authors articulate a distinctive perspective on social science explanation that avoids the problems of scientism and subjectivism by steering a careful course between lawlike explanations and thick descriptions. Drawing upon hermeneutics, poststructuralism, psychoanalysis, and post-analytical philosophy, this new approach offers a particular set of logics – social, political and fantasmatic – with which to construct critical explanations of practices and regimes.

While the first part of the book critically engages with lawlike, interpretivist and causal approaches to critical explanation, the second part elaborates an alternative grammar of concepts informed by an ontological stance rooted in poststructuralist theory. In developing this approach, a number of empirical cases are included to illustrate its basic concepts and logics, ranging from the apartheid regime in South Africa to recent changes in higher education.

The book will be a valuable tool for scholars and researchers in a variety of related fields of study in the social sciences, especially the disciplines of political science and political theory, international relations, social theory, cultural studies, anthropology and philosophy.

This is an exceptionally valuable contribution to political and social theory from a poststructuralist perspective. Erudite, balanced, and supported by revealing case-studies, the book explores the inner logic of a critical approach and places it convincingly amidst a rich tapestry of methods and strategies. Political scientists, political theorists, and philosophers of the social sciences will find that it enhances their own understanding of the discipline; students and general readers will be indebted to it for a highly accessible and lucid analysis. If anyone doubted the coming of age of post-structural political theory, here is the proof of its maturity.

This is a remarkable book, not only due to its rigour and scope, but also because of its sustained effort to engage with the most important contemporary currents in social explanation and social theory. As for the highly original theoretical approach that the authors present, I can only say that it is the most significant attempt so far at elaborating a general framework for social research from a poststructuralist perspective. The notion of logics, as defended in this text, is bound to have a lasting influence on the work of social and political scientists.

Logics of Critical Explanation examines positivist, hermeneutic, rational choice and other methods, drawing selective sustenance from several to build a theory of critical explanation reducible to none. The result is a unique book in the philosophy of the social sciences, one that appreciates an element of chanciness in the world as it retains the ambition to explain. An indispensable book for those who are dissatisfied with the options available today.

An ambitious and inventive intervention in debates on the methodology of the social sciences. Drawing on the resources of contemporary philosophy of science as well as hermeneutic and poststructuralist philosophy, Glynos and Howarth offer a provocative, but well-grounded, argument for a focus on 'logics' as basic to the tasks of both explanantion and criticism. Their argument is insightful, well illustrated, and should be widely debated.

In this path-breaking and commanding text, Glynos and Howarth call for and set out a distinctive approach to a reconstruction of social science. Established and emergent traditions of enquiry – naturalism and hermeneutics – are carefully reviewed and critiqued as a vehicle for elaborating the first systematic and sustained application of poststructuralist insights to a critical analysis of the nature of explanation and method. This is an important, challenging book for researchers across the social sciences, including the fields of management and business. It also has wider relevance for anyone who uses social scientific data, or is curious about how a ‘science’ of the social might be possible.

This edifying book is a tremendous accomplishment, offering a fresh look at both epistemology (what counts as knowledge) and ontology (our underlying presuppositions about the way the world goes round). But more than that, this book raises poststructuralist discourse theory to a new level of intellectual prestige. The raw material for a coherent poststructuralist discourse theory has been available for some time. And now, thanks to David Howarth and Jason Glynos, the wide ranging poststructuralist literature has been deployed to redescribe social science research as problematization and articulation – a context-sensitive research protocol that challenges positivism’s universalizing causal laws, which have inappropriately colonized the social sciences. This is careful yet imaginative scholarship, worthy of widespread attention across the social sciences.

This is one of those exceedingly rare books which is both philosophically astute as well as of considerable practical use. It breaks new, creative ground concerning age-old issues in political theory and the philosophy of the social sciences. At the same time, it offers to the political analyst valuable heuristic strategies for engaging in critical empirical inquiry.

Beginning with a much-needed critique of scientism and the current state of affairs in the social and political sciences, Glynos and Howarth develop an original, sophisticated and rigorous account of discourse theory. Using the guiding idea of ‘logics of critical explanation’, Glynos and Howarth propose nothing less than a new ontology for social and political theory. This is excellent work that should be debated and discussed in the years to come.