Logistics of Warfare in the Age of the Crusades 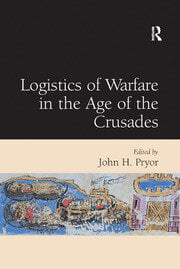 Logistics of Warfare in the Age of the Crusades

How were the Crusades made possible? There have been studies of ancient, medieval and early modern warfare, as well as work on the finances and planning of Crusades, but this volume is the first specifically to address the logistics of Crusading. Building on previous work, it brings together experts from the fields of medieval Western, Byzantine and Middle Eastern studies to examine how the marches and voyages were actually made. Questions of manpower, types and means of transportation by land and sea, supplies, financial resources, roads and natural land routes, sea lanes and natural sailing routes - all these topics and more are covered here. Of particular importance is the attention given to the horses and other animals on which transport of supplies and the movement of armies depended.

John H. Pryor is an Associate Professor at the University of Sydney, Australia in the Centre for Medieval Studies.

"This is an essential work for those studying medieval military history, and an important read for anyone with a serious interest in the period or the history of war and logistics. " - The NYMAS Review, Autumn-Winter 2019