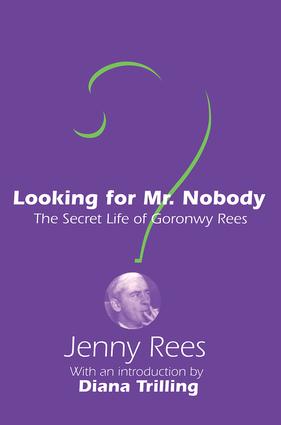 Looking for Mr. Nobody

Goronwy Rees (1909-1979) was one of the most gifted and promising figures in the constellation of British poets, journalists, and intellectuals of the 1930s that included Louis MacNeice, W. H., Auden, C. Day Lewis, Isaiah Berlin, and Anthony Blunt. Like many liberals of his generation, he was shocked by the effects of the Depression and correspondingly sympathetic to the Communist regime in Russia. Guy Burgess, of the Cambridge spies--Burgess, Maclean, Philby, and Blunt, admitted his espionage to Rees. His association with Burgess was to blight the rest of Rees's life.</p> When Burgess defected in 1951, and Rees denounced him to MI5, Rees was viewed more as a spy out to save his own skin than as an honorable citizen. His anonymous, sensationalist articles in The People, denouncing Burgess's political activities and all but naming names, condemned him with the British intellectual community--not for his politics but for his betrayal of a friend. Colleagues and acquaintances accused him of trying to initiate a McCarthyite witch-hunt. He lost his job. His academic career was ruined. In Looking for Mr. Nobody, Jenny Rees deals with many of the old charges made against her father in her search for the answer to her own question, "Was he, too, a spy?" Had he joined up with Burgess and Blunt and passed secrets to the Soviet Union? Her quest for the truth reveals a fascinating portrait of a brilliant but flawed man of letters, handsome and seductively charming, caught up in the radical, political commitments of the 1930s, Communist Party membership, and his tortured relationship with the notorious Cambridge spies.