Louis H. Sullivan and a 19th-Century Poetics of Naturalized Architecture 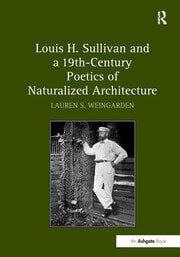 Louis H. Sullivan and a 19th-Century Poetics of Naturalized Architecture

For most of the twentieth century, modernist viewers dismissed the architectural ornament of Louis H. Sullivan (1856-1924) and the majority of his theoretical writings as emotional outbursts of an outmoded romanticism. In this study, Lauren Weingarden reveals Sullivan's eloquent articulation of nineteenth-century romantic practices - literary, linguistic, aesthetic, spiritual, and nationalistic - and thus rescues Sullivan and his legacy from the narrow role imposed on him as a pioneer of twentieth-century modernism. Using three interpretive models, discourse theory, poststructural semiotic analysis, and a pragmatic concept of sign-functions, she restores the integrity of Sullivan's artistic choices and his historical position as a culminating figure within nineteenth-century romanticism. By giving equal weight to Louis Sullivan's writings and designs, Weingarden shows how he translated both Ruskin's tenets of Gothic naturalism and Whitman's poetry of the American landscape into elemental structural forms and organic ornamentation. Viewed as a site where various romantic discourses converged, Sullivan's oeuvre demands a cross-disciplinary exploration of each discursive practice, and its "rules of accumulation, exclusion, reactivation." The overarching theme of this study is the interrogation and restitution of those Foucauldian rules that enabled Sullivan to articulate architecture as a pictorial mode of landscape art, which he considered co-equal with the spiritual and didactic functions of landscape poetry.

'Lauren Weingarden has crafted a masterful and illuminating study of Louis Sullivan’s architecture, ornament, and writings, considered through the triple lens of imagination, art, and society, and related closely to the writings of Emerson, Ruskin, and Whitman.' Richard Etlin, University of Maryland, USA

'Weingarden presents to us an exemplar of in-depth, insightful, and contemporary scholarship. The strength of the book is in its tight structure, evidence-based disclosures, and meaningful cross-referencing of Sullivan's architectural and philosophical thought to Ruskin, Emerson, and key poets, architects, and thinkers. However, most importantly, the book is a much-needed re-evaluation of modernist architectural thought, especially as so much of existing historical scholarship is dogmatic and one-dimensional... Louis H Sullivan and a 19th Century Poetics of Naturalised Architecture makes a substantial contribution to the interdisciplinary fields of architecture and interior architecture and decoration... The book also contributes to nineteenth century studies... Ruskin scholars will find this book exciting... The book will also be of interest to architectural theorists and designers... Louis H Sullivan and a 19th Century Poetics of Naturalised Architecture opens up numerous and delightful avenues for future scholarship beyond itself, which is what good scholarship ought to achieve.' The Eighth Lamp