Love Across Borders
Asian Americans, Race, and the Politics of Intermarriage and Family-Making 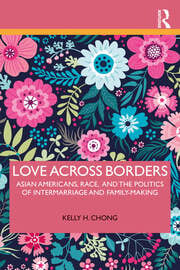 Love Across Borders: Asian Americans, Race, and the Politics of Intermarriage and Family-Making

High rates of intermarriage, especially with Whites, have been viewed as an indicator that Asian Americans are successfully "assimilating," signaling acceptance by the White majority and their own desire to become part of the White mainstream. Comparing two types of Asian American intermarriage, interracial and interethnic, Kelly H. Chong disrupts these assumptions by showing that both types of intermarriages, in differing ways, are sites of complex struggles around racial/ethnic identity and cultural formations that reveal the salience of race in the lives of Asian Americans.

Drawing upon extensive qualitative data, Chong explores how interracial marriages, far from being an endpoint of assimilation, are a terrain of life-long negotiations over racial and ethnic identities, while interethnic (intra-Asian) unions and family-making illuminate Asian Americans’ ongoing efforts to co-construct and sustain a common racial identity and panethnic culture despite interethnic differences and tensions. Chong also examines the pivotal role race and gender play in shaping both the romantic desires and desirability of Asian Americans, spotlighting the social construction of love and marital choices.

Through the lens of intermarriage, Love Across Borders offers critical insights into the often invisible racial struggles of this racially in-between "model minority" group -- particularly its ambivalent negotiations with whiteness and white privilege -- and on the group’s social incorporation process and its implications for the redrawing of color boundaries in the U.S.

Acknowledgements
1. Introduction
2. Asian American Intermarriage
3. Marrying-Out: Development of Racially Transgressive Desires
4. Multiracial Family-Making and the Revitalization of Ethnic Identity and Culture
5. Marrying Within the Racial Fold: Romantic Appeal of Co-Racials
6. Constructing Hybridity: Cultural and Ethnic Negotiations in Interethnic Marriage and Family-Making
7. Does Gender Matter?
8. Conclusion: Asian American Intermarriage: Being in and From the Racial Middle
Appendix A: List of Participants
Appendix B: Interviewing
Bibliography

is a Professor and Chairperson of Sociology at the University of Kansas. She is the award-winning author of Deliverance and Submission: Evangelical Women and the Negotiation of Patriarchy in South Korea (2008) and numerous journal articles. Her current areas of scholarship include race/ethnicity, gender, immigration, religion, Asian  American Studies, and Asian Studies.

"This book offers a compelling and unique portrait of intermarriage among Asian Americans, from the formation of interracial and interethnic relationships to their development over time. Reaching beyond the common stereotypes, the book offers a nuanced analysis of how race shapes experiences of love, intimacy and family for Asian Americans."

"In light of the growing debates about Asian Americans (and multiracial Asian/White people) comprising a kind of honorary White status in American society, this careful and nuanced book provides a fascinating account of how Asian Americans’ negotiations with Whiteness is deeply ambivalent. By investigating both Asian Americans' interethnic and interracial unions, this book provides a groundbreaking understanding of the racial and ethnic fault lines in formation in the USA."

"In Love Across Borders, Kelly H. Chong investigates how race influences marital boundary-crossings among Asian Americans even in an age when popular colorblind discourses discourage the "seeing" or discussion of race and racism. The book’s attention to the development of Asian American panethnicity and the rise of intra-group marriage question the long-held assumption that assimilation will amount to intermarriage with Whites over successive generations, and the book’s study of American/White intermarriage demonstrates the tensions Asian-Americans feel with respect to Whiteness in a society grounded in White normativity. Along with her ability to reveal how society’s structure shapes individual lives, Chong’s analysis is sharp and centers how racial/gender politics and cultural negotiations (including what it means to be Asian American) are all at work behind-the-scenes in family-making, and how this process reflects larger postcolonial political struggles even as it makes new identities."