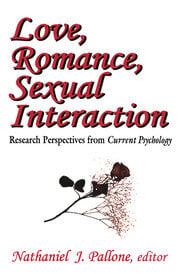 This volume brings together in a single resource fourteen empirical studies examining a variety of emotions and behaviors covering many aspects of love, romance, and sexual interaction from recent issues of Current Psychology. Scholars from universities and research centers bring under the empiricist's microscope a variety of emotions and behaviors, ranging from dating relationships, criteria for the ideal mate held by both men and women, the relationship between perceptions of parents and partners in a direct test of psychoanalytic conceptualizations of mate selection, how the media influence perceptions about love and romance, sources of marital conflict, gender differences in responses to infidelity, and even the attitudes of "consumers" toward prostitution.